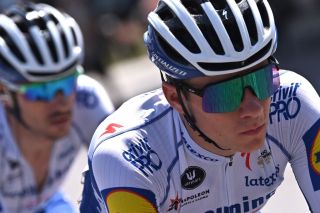 Remco Evenepoel is expected to be transported by aeroplane back to Belgium in the next 24 hours, according to a medical update from his team Deceuninck-QuickStep on Sunday.

The Belgian rider suffered a fractured pelvis and a right lung contusion following a crash at Il Lombardia on Saturday. The team confirmed that he is currently in good condition but will remain in hospital in Como until he can be transported home.

"We would like to inform you that Remco Evenepoel had a quiet night at the hospital and that the evolution of his condition is good. Due to the nature of the injury, Remco has to be transported by plane to Belgium in a supine position," the team confirmed in a medical update on Sunday.

"The team is doing everything possible to bring him back home as soon as possible, hopefully in the next 24 hours, in the most efficient and safe way."

Lefevere: Evenepoel is alive, nothing else matter

Evenepoel crashed during the final 50km of racing at Il Lombardia after losing control on the descent of the Muro di Sormano, hitting the stone wall of a bridge and falling into the ravine below.

He was placed into a precautionary neck brace and taken to the Como hospital by ambulance following the crash. The team confirmed that he was conscious at all times and he underwent a series of examinations to reveal the extent of his injury.

Deceuninck-Quickstep confirmed Saturday evening that the 20-year-old suffered a fractured pelvis and bruised lung in the crash.

Evenepoel has had a successful season with victories at four stage races: the Tour de Pologne, Vuelta a Burgos, Volta ao Algarve and Vuelta a San Juan. The team confirmed that due to the extend of his injuries, he will be sidelined for the coming period, with team manager Patrick Lefevere saying his 2020 season was over, ruling him out of the Giro d'Italia in October.