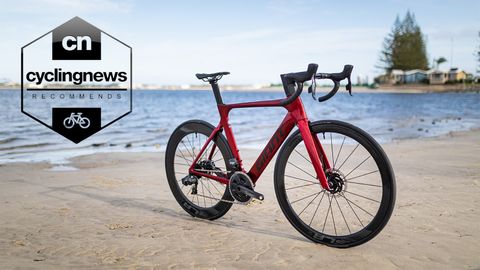 The Propel Advanced Pro 0 holds speed like few bikes we've swung a leg over, while still maintaining its composure and predictability in blustery crosswinds and through corners

The Giant Propel was originally launched back in 2013 at the Tour Down Under. As one of the early aero road bikes to hit the market, it was stiff, fast and surprisingly agile; but those ultra-aero v-brakes the brand specced were about as useful as a screen door on a submarine.

While the latest version of the Propel, launched at the 2017 Tour de France, cuts a similar silhouette, every tube, angle, and component has been updated and upgraded. And those v-brakes, which still give me ‘pad-on-carbon-rim-squealing-yet-still-gaining-speed' nightmares have thankfully been retired for good — the Propel only comes with disc brakes. The way that those brakes from the original frame are seared into my memory makes it all the more interesting that Giant says it used the discs as the starting point and built the rest of the bike around the brakes.

Giant has worked with the Aero Concept Engineering wind tunnel on every iteration of the Propel, and our Advanced Pro test bike is no exception. It should also not come as a surprise that Giant tells us the new Propel came out on top as the fastest aero road bike according to its own testing, but what is interesting is the brand introduced a mannequin in the riding position to make the simulation truer to real-world conditions.

Everything about this bike is aero from the semi-integrated cockpit and aero tubing to the geometry and riding position. With a 545mm stack and 383mm reach in our size medium tester, the bike is designed for a long and low riding position, which a lot of riders won’t be flexible enough to take full advantage of. The angles are equally aggressive measuring 73-degrees at both the head and seat tube.

The Propel Advanced Pro frame sits in the middle of Giant’s range and is made using the brand’s second tier, 'Advanced Carbon.' You don’t get the 'Advanced SL' carbon fibre which is lighter but the bike does see a standard seatpost which uses a hidden clamp and wedge system, instead of the ISP (Integrated Seat Post). While a seat mast does shed a bit of weight and might add some vertical compliance too, they can be inconvenient to live with, especially if you plan to put your bike into a travel bag.

Over the years I've probably had a dozen Giant bikes roll through my door for testing, but this Advanced Pro is easily the best looking of the lot. The candy apple red paint is just the right amount of bold, yet it shouldn't age the way neon paint jobs tend to do — plus everyone knows a red paint is worth at least 10 free watts.

The majority of the parts on the Propel Advanced Pro come from Giant with the only exception being the SRAM groupset and brakes. Shod with Force eTap AXS the drivetrain is wire-free and was flawless throughout my entire testing period. I’ve spent quite a bit of time on the Force eTap group at this point in time, there is precisely zero discernible performance difference between Force eTap AXS and the more expensive RED version. Yes, it comes with a small weight penalty, but the chainset doesn’t also use the one-piece, power-meter chainrings that are astronomically expensive to replace.

Speaking of the crankset, this test bike came with the Quarq DZero power meter. I can't make any quantifiable claims as to its accuracy because I didn’t test it against a second power meter, but I also didn’t notice any wonky readings through my test period. Pairing was issue-free and, throughout my test period, there were no dropouts.

At the front Giant has opted for a semi-integrated system, by that I mean it’s a bar and stem, however, both components are proprietary and you’re locked into Giant’s system. The Contact SLR Aero handlebars don’t have a round mounting surface, and can only interface with the Contact SL aero stem. However, as far as 'integrated' cockpit systems go, this one is likely to cause the least amount of headaches.

Instead of the cables running completely inside the bar and stem, they pop out through a hole in the bars and run underneath a removable cover on top of the stem. Giant went this route so you didn't have to re-cable your bike should you want to change stems and it definitely simplifies the process of routing the brake hoses. But, should you want to ditch a bunch of spacers a few spacers there isn't a whole lot of room under the cover and you may need to chop a bit of length off your cables and housing.

Having said that, the cover is not structural and you can ride without as you dial in your position. To achieve my preferred bar height I had to go this route, and as you can see in the photo above, it’s ugly, but it works.

Giant offers the Contact SLR Aero handlebar in widths from 400mm-440mm and the stem in lengths from 80mm to 120mm, so there are combos that should make your bike fit work, however, you’re locked into the compact bend bar shape. It was pretty comfortable for me, and I didn’t have any wrist clearance issues in the drops.

Continuing on with the own branded parts, the Giant SLR 1 carbon wheels are a mullet setup, with a 65mm rim in the rear and a 42mm rim at the front. They are fast-rolling and spin up with a sense of urgency, but most importantly they were well behaved in the blustery winds we get here on Australia's Gold Coast. With an internal rim width of 17mm, the rims are not pushing the boundaries of width, however, they spread the 25C Cadex Race tubeless tyres nicely, providing plenty of sidewall support, and I was able to run sub-80psi without issue.

I don’t know that I’ve ever ridden a bike that doesn’t have a bull horn and bar extensions that hold its speed quite like the Propel Advanced Pro Disc; it’s also not terrifying when it comes time to go around a corner.

It doesn’t have the snap and agility of the best lightweight bikes, no surprise, given it weighs 8.23kg without bottle cages or pedals, but the thing absolutely flies along the tarmac.

With this blistering top-end speed, the handling is stable and to make a mid-corner line change you have to mean it, though it doesn’t lumber around a hairpin bend the way an endurance bike does. Handling was no doubt confidence-inspiring, and the geometry is partly to thank for this, however, the Cadex tyres and 160mm brake rotors are also deserving. At this stage in the game, 25mm rubber is nothing to get excited over, however, even when paired with the narrow SLR 1 rims the 170tpi casing was supple, and without tubes, they allowed for low pressures with unflappable cornering and braking traction. This allowed me to not only brake late when approaching a corner at warp-speed, but also push hard and accelerate through the bend.

With this being an aero race bike, it should also come as no surprise that the ride quality is not akin to a La-Z-boy. The bike transmits what’s going on underneath you, but the frame still cuts out just enough high-frequency buzz to prevent your body from feeling like you’ve done five rounds in the octagon after a 4-hour ride. The combo of the flat-backed seatpost and ability to run the tyres at low pressure the bike takes the edge off of square impacts.

To me, the Giant Propel is similar to a classic American muscle car like a Corvette. It’s not going to beat the quick European coupe out of a corner, or over a mountain pass, but when you get to the straighter sections of road and you can slam the pedal to the floor there isn’t much that’s going to keep pace.

It’s neither the lightest bike nor the most comfortable on the market but that’s not what it’s designed to be. It’s spectacularly efficient at speed and dances right up to that pace. A set of lightweight wheels would definitely make the bike a bit more lively, but I don’t know that it needs it. For someone who lives somewhere flat, or if you’re a crit racer, the Propel Advanced Pro won’t disappoint.

Priced at £5,799 / $7,000 / AU$7,999 it’s anything but cheap, however, with carbon wheels and a power meter built into the price, I don’t think it demonstrates terrible value — especially considering how much fun I’ve had ripping around on this bike.