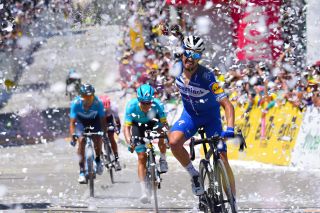 In its third year on the UCI Calendar, Tour Colombia 2.1 returns February 11-16 with another field of Grand Tour winners and future contenders ready to begin their 2020 campaigns.

The South American cycling hotbed has been knocking on the door of international greatness for decades and appears to have finally arrived in the form of Egan Bernal and his first Tour de France win last July at the age of 22.

Bernal won the inaugural edition of this race in 2018 when it was named Colombia Oro Y Paz, and he was fourth last year while in service of his Team Ineos teammate Iván Sosa.

Bernal returns this year triumphant as the reigning Tour de France champion, a feat no other Colombian has achieved, and the week will likely be a moving celebration of his achievement and his country as well as a bike race.

The decidedly Latin American roster for the 2020 race is a perfect fit for this cycling-crazed country, where passion for the sport could only have been turned up to 11 – or more if possible – now that the Colombian fans have a Tour de France winner to call their own.

While last year’s roster featured four-time Tour de France winner Chris Froome and Colombian hero Nairo Quintana, past winner of the both Giro d’Italia and Vuelta a Espana, this year’s line-up has a pair of reigning Grand Tour champions in Bernal and his new Team Ineos teammate, 2019 Giro winner Richard Carapaz of Ecuador.

Froome, the tall, lanky Briton, was well received last year in Colombia, where he got the royal treatment and a dedicated security detail to keep his enthusiastic admirers at bay. At the time, Bernal was the up-and-coming hopeful targeting the Giro, but that all changed when Froome crashed in June and Bernal seized the Tour victory while his team leader was out with injury.

Although Bernal and the other young WorldTour Colombians in the Tour Colombia may have ambitions further down the road for this season, there's an entire peloton full of ambitious young South American riders ready to show off their skills to an international audience, keeping the race rolling at a good clip and very likely making it highly unpredictable.

The 2020 Tour Colombia 2.1 route will once again be aimed toward the stage 6 summit finish on the final day, when the GC contenders will have one last showdown on Alto del Verjón, a category 2 climb that tops out at 3,290 metres [10,794 feet]  of elevation. In fact, not a single pedal will be turned over in anger at this year’s race at less than 2,500 metres.

The race will take place in the Boyacá department, southeast of Medellin, where last year's race was centered, and northeast of the capitol city of Bogotá. The city of Paipa, with a population of just over 30,000, will be the central hub for much of the racing, with multiple stages sharing the same stretch of road.

Needless to say, the altitude will be a major factor in the race, which suggests the local riders will have a decided advantage over the Europeans and North Americans who make the trip.

Stage 4 includes another uphill finish, while stages 2, 3 and 5 will definitely challenge the climbing legs in the peloton, but long flat runs to the finish could provide opportunities for the fit sprinters or ambitious escape artists.

The 2020 race, which will be considerably more rural than the previous two years, starts with a 16.7km individual time trial in Tunja on a fairly flat loop. The course climbs 90 metres at the halfway point but then loses the elevation gain on the way back to the finish.

Stage 2, a 152.4km day from Paipa to Duitama, looks on paper to be the only sure day for the sprinters – if there is such a thing at these altitudes. The flat course offers little in the way of elevation gain.

The 177.7km third stage between Paipa and Sogamoso features moderate early climbing, which will favour a strong breakaway, but the final third is a relatively flat run for the finish line.

Stage 4, which covers 168.6km between Paipa and Santa Rosa de Viterbo, once again includes moderate climbs early in the day and a generally downhill run to the finish, but instead of a flat finale for the fastmen, the peloton will take on the 6km climb of the Alto Malterias to 2,760 metres.

The penultimate day from Paipa to Zipaquirá (Bernal's hometown) covers 174.9km and includes three category 4 climbs interspersed throughout the first 120km, including the Alto Sisga at 2,866 metres. That comes after the Alto Moral at 2,951 metres and the Alto Quemada at 2,917 metres. If the sprinters can survive those heady climbs, the run to the finish will favour them.

The final day takes riders 182.6km from Zipaquirá to El Once and Alto del Verjón. The final climb is a real kicker, but before the race gets there the riders will need to climb up and over Alto Sisga again – actually twice from two different directions –  and then Alto Patios, which tops out at 3,016 metres just 12km from the finish. A fast descent leads to the bottom of the final climb, where the overall race will likely be decided.

In light of last weekend’s Colombian road championships, where Daniel Martínez won the time trial and Sergio Higuita soloed to the road race win, EF Pro Cycling could very well be in the driver’s seat again next week.

Defending Tour Colombia champion Miguel Ángel López and his Astana team are not returning to the race this year, and Bernal crashed heavily during the road race, as did his Team Ineos teammate Sosa, who broke his thumb and had to withdraw from his planned participation.

Sosa was second to López last year after a thrilling final stage, but he has now been replaced in the Ineos line-up by Italian Leonard Basso, ending Team Ineos' all-Latin American roster.

Bernal was fourth last year after sacrificing his own chances for Sosa, but the reigning Tour de France champion’s current condition could be suspect, given that he lost a fair amount of skin in his nationals crash and he previously admitted after his third-place result in the time trial that he’s not in top shape at this point in the season.

Never short of talented riders, Team Ineos also features 2019 Giro d’Italia champion Richard Carapaz. The Ecuadoran was ninth overall in Colombia last year while riding for Movistar in support of Nairo Quintana, who will not compete in tis year's race with his new Arkéa-Samsic team.

EF Pro Cycling has not yet released its official roster, but, provisionally, Martínez – who was third last year – and Higuita will be joined in the team by American Tejay van Garderen and fellow Colombian Jonathan Caicedo to make a formidable climbing contingent.

Deceuninck-QuickStep is returning with two 2019 Tour Colombia 2.1 stage winners in Julian Alaphilippe – seventh overall last year – and Bob Jungels, although the Belgian squad may find the mountains and altitude this year ill-suited to any GC ambitions. The team is bringing Colombian Álvaro Hodeg for the sprint opportunities.

Italian Fabio Aru will lead the GC hopes for UAE Team Emirates, which will also feature Colombians Sergio Henao – eighth last year – for the mountains and Juan Sebastián Molano for the sprints. Carlos Betancur will head up the Movistar side with Argentine Eduardo Sepùlveda, while Israel Start-Up Nation is bringing a squad for the sprints that includes former Colombian road champion Edwin Avila and American Travis McCabe.

Esteban Chaves, riding for the Colombian national team on loan from Mitchelton-Scott, is also likely to figure into the stage hunting or GC battle.

Among the Pro Continental and Continental teams, Óscar Sevilla from Team Medellin is always one to watch. The ageless Spaniard was recently third overall behind Remco Evenepoel (Deceuninck-QuickStep) and Filippo Ganna (Italy) at the Vuelta a San Juan in Argentina.

Androni Giocattoli-Sidermec’s Miguel Eduardo Flórez won the queen mountain stage at the Vuelta a San Juan last week, and Rally Cycling, the US Pro Conti team, is always one to watch as well, with Robin Carpenter and Colin Joyce playing active roles in the Argentine race.

Featuring 27 teams of up to six riders each, the 162-rider Tour Colombia 2.1 peloton promises to be packed with fresh legs and a lot of ambition.