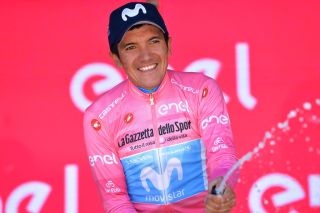 The Colombian race announced today that Carapaz, 26, will be part of the Team Ineos roster that will compete in the six-day race that runs from February 11-16. Bernal previously announced his own plans to race his home country's tour this year.

Carapaz moved to the powerhouse British team after four years with Spanish squad Movistar, where he developed as a mountains helper for the likes of Nairo Quintana and Alejandro Valverde before his break-out performance last year at the Giro.

The Ecuadorian rider has made no secret about his hopes of returning to the Giro to defend his title this year, and a start in Colombia would be similar to the previous three seasons with Movistar, when he kicked things off in Argentina at the Vuelta a San Juan and then raced in Colombia.

Ineos will field a team for the WorldTour opener at the Tour Down Under in January, but the British squad are not on the line-up for Argentina, leaving Carapaz to look to Colombia for his usual South American start.

The six day race starts Tuesday, February 11, with a 16.7km individual time trial in Tunja.  Stage 2 takes riders 152.4km from Paipa to Duitama. Paipa hosts the start of the 177.7km third stage, which finishes in Sogamoso. Stage 4 is 168.6km from Paipa to Santa Rosa de Viterbo, followed by stage 5's 175km from Paipa to Zipaquirá.  The race concludes Sunday, February 16, with a final 182.6km stage from Zipaquirá to the climb up Alto del Verjón.