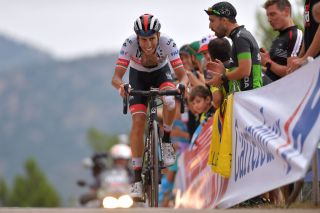 Fabio Aru in action at the 2019 Vuelta a Espana (Image credit: Getty Images)

Fabio Aruwill make his 2020 season debut at the Tour Colombia 2.1, the race organisation have announced, as the Italian continues a gradual recovery from the Cytomegalovirus that forced him to quit the Vuelta a Espana.

It will be the UAE Team Emirates rider’s first time to compete in Colombia. He previously raced in South America at the 2013 Tour de San Luis and at the 2016 Rio Olympics.

Aru will be in Colombia in the two weeks leading up to the race for an altitude training camp. The Sardinian will ride Tirreno-Adriatico on his return from Colombia, and his spring programme will also include a debut at Liège-Bastogne-Liège and an appearance at the Tour de Romandie.

Aru will miss the Giro d’Italia, where Davide Formolo will lead the UAE Team Emirates challenge, and he will instead line up at the Tour de France alongside Tadej Pogacar, who so impressed as a neo-professional in 2019. Aru is scheduled to ride the Critérium du Dauphiné as his final warm-up for La Grande Boucle.

The 29-year-old is also hoping to earn selection in the Italian team for the Tokyo Olympics road race, which takes place six days after the conclusion of the Tour.

“For Tokyo there would have been a more targeted build-up, perhaps with the Giro,” Aru told La Gazzetta dello Sport earlier this month. “But the main thing is to be going well. And if you go well at the Tour…”

The third edition of the Tour Colombia 2.1 takes place from February 11-16 in the departments of Boyacá, Cundinamarca and Bogotá.

Aru will be joined in the UAE Team Emirates line-up by Colombian riders Camilo Ardila, Cristian Camilo Muñoz, Sergio Luis Henao and Sebastián Molano. Elsewhere, Deceuninck-QuickStep have confirmed that Julian Alaphilippe and Bob Jungels will be among the participants.