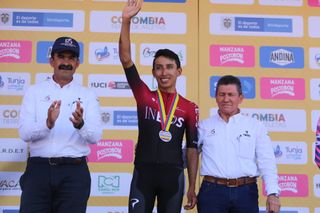 Egan Bernal avoided serious injury in a crash at the Colombian national championships on Sunday, insisting he was ready for the upcoming Tour Colombia 2.1 stage race despite suffering significant road rash.

The 2019 Tour de France winner slid out on a sweeping descent during the final hour of the road race in the Tunja region of Colombia, with roadside fans capturing the moment and posting a video on social media.

Bernal seemed to lose control of his bike and slid along the road towards the curb. He sustained visible wounds to his hip, lower back and left arm but he managed to eventually get back on his bike and re-join the chase group.

Despite the pain, Bernal managed to fight for a spot on the podium and won the sprint for second place behind winner Sergio Higuita (EF Pro Cycling). Higuita's teammate Daniel Martínez finished third, just days after he won the time trial title.

"It was painful. It was a big crash but I should be happy because it was only some skin – I’ve no fractures or anything like this," Bernal explained.

"I could continue racing – but after the crash I told Sosa that he should be the new leader in the race. Initially after the crash I didn’t know if I could finish the race. During the lap I was helping him and I did a big effort for him, then he attacked."

Bernal has sustained a number of injuries in crashes during his short career. He was unable to ride the 2019 Giro d'Italia after fracturing his collarbone in training, and also underwent nose and jaw surgery after crashing face-first at the 2018 Clásica San Sebastián.

He started his 2020 season at the Colombian National Championships, finishing third in the individual time trial held on Friday. Bernal teamed up with Ineos teammates Iván Sosa and Sebastian Henao for the road race but Sosa also crashed hard after Bernal's spill, forcing a late change in Team Ineos' tactics.

"He (Sosa) went to the front with Higuita and we knew we had a good rider up there at the front of the race. Then it was about trying to control the group behind," Bernal explained.

"We were comfortable, and then on the last lap we just could see Higuita. We didn’t know then what had happened with Sosa, so Seb (Henao) started to pull really hard to try to close the gap. We tried for the silver medal. In the final, I wasn't feeling super because of the crash, but I could sprint and I was able to take second place."

"I’m happy because I got a silver medal after a crash. I think the team did a really good job, so I would have liked us to be able to fight more for the win. But we did a good job and I was able to continue fighting and get on the podium. It's a good thing for me and I did it for the Colombian fans and my teammates. Two races, two podiums – we are ready for the Tour of Colombia."

The six-day Tour Colombia 2.1 begins on February 11, with Bernal set to lead Team Ineos. He won the race in 2018 and finished fourth in 2019 behind Miguel Ángel López (Astana).