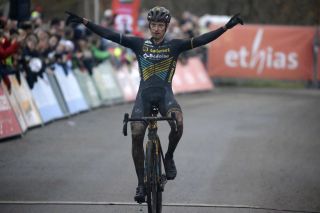 Quinten Hermans powered to his second victory of the cyclo-cross season, taking out a muddy race in Essen over Laurens Sweeck (Pauwels Sauzen-Bingoal). Former world champion Zdenek Stybar (Deceuninck-Quickstep) finished outside the top 10 in his season debut.

It was Herman's second win after a C2 victory in Beringen, Germany in October.

With the dominant world champion Mathieu van der Poel and World Cup leader Eli Iserbyt on a training holiday in Spain, the field was wide open for the rest to fight for victory.

Thijs Aerts led the first charge on the opening lap before the race settled in for the next few laps. Hermans attacked on the third lap and Sweeck, who started on the second row, was too far back to respond.

Sweeck distanced the rest in pursuit, with Tom Pidcock coming in for the final podium spot.