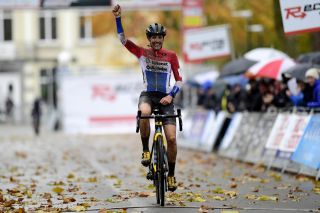 Brand and Alvarado distanced their rivals in the sand, the mud and the city streets, and especially during a final bike change, with Brand using her better road racing skills to win the sprint up the side of the bridge.

The long laps in the Kortrijk river park led to just a 40-minute race for the women, with the road sections and long sweeping bike bridge making it as much as a kermesse as a cyclo-cross race.

Italian national champion Eva Lechner had the best start and led the race down to the roundabout but the strongest riders quickly emerged on the few technical sections, the sand pit and the run through the mud. Brand, Alvarado, Cant, Worst and her 777 teammate and European champion Yara Kastelijn rode together, exchanging attacks and surges but nobody managed to get away.

Alvarado made two attacks that hurt but Brand and the others were able to close the gap. Late on Kastelijn lost the wheel and then Cant lost a few vital seconds as she struggled to get her foot in the pedal after a late bike change. She also delayed Worst, allowing Brand and Alvarado to go clear.

They stuck together until the sprint up the road bridge.  Alvarado lead it out but went early and sprinted on the top of her brake levers. Brand went at the right time and in the drops, giving her extra power and speed.

Worst and Cant were only 17 seconds back but missed out on victory.