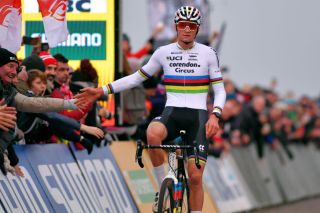 Mathieu van der Poel (Corendon-Circus) gave another display of poise and power in cyclo-cross racing on the new city-centre course of the DVV Verzekeringen Trofee - Urban Cross in Kortrijk, biding his time for 40 minutes of the fast race before surging away to victory.

His rivals formed a chase pack but could not pull him back, and soon began to race for the placings. Tim Merlier (Creafin-Fristads) got it in a sprint finish, with Toon Aerts (Telenet Baloise Lions) taking third. Both finished 27 seconds behind.

It was van der Poel's eighth victory of his short but successful cyclo-cross season.

The riders raced nine laps of the long and fast course around the Kortrijk park, with the start and finish on the road bridge over the river Leie, with a twisting bike path offering another switch of rider banks.

The twisting course included road sections, compact mud tracks, a descent into a sand pit and a muddy section where the riders were forced to run.

Van der Poel led from the front down the bridge to the roundabout but then preferred to sit on the wheels as a front group formed.

After two of the laps and 15 minutes of racing, there were still 20 or so riders together, with the high speed and fast surfaces allowing riders to benefit from the slipstreams.

Bike changes shuffled the group several times but Van der Poel stayed in the pack, giving his Belgian rivals a chance of victory. However, he returned to his true self after 30 minutes of fast racing. He moved up to second place with ease and then surged away on the climb up to the finish line on the road bridge and never looked back.

His gap was up to 30 seconds after a lap out front, allowing him to cruise to yet another victory.