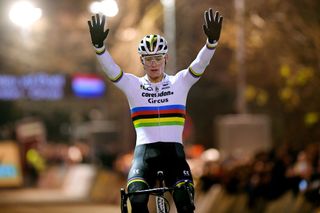 “It went pretty well. It was quite a tough course with a lot of corners. Early on I felt that I rode pretty strong. To create a sizeable gap I had to dig pretty deep,” Van der Poel told ad.nl.

“This wasn’t my favourite course with all these turns. It was hard to find spots where I could deploy my power. Then again, it was very busy along the course. I’m pleased that the crowds are growing each year. It’s great that I’m adding to that growth. I remember that there were very few people at my first championships race,” Van der Poel said.

Mathieu Van der Poel had a blistering start in Rucphen. Only Lars van der Haar was briefly able to keep up with the world champion but in a twisting and turning section he slowly had to let go of van der Poel. By the time the riders reached the Rucphen carousel Van der Poel had a small bonus over Van der Haar.

Corné van Kessel and Joris Nieuwenhuis were a handful of seconds further back. If Van der Haar stood a chance to get back to the leader, then those chances went to pieces at the barriers.

Van der Haar was the only rider who opted not to hop the barriers, forcing him to lose a bit more ground. Van Kessel tried hard to get back to Van der Haar with Nieuwenhuis mostly sitting on his wheel but that didn’t work out. Twenty minutes into the race Van Kessel sat up and forced Nieuwenhuis to take the initiative but a little later Van Kessel was dropped. After three of the seven laps Van der Haar trailed Van der Poel by ten seconds but from there the gap quickly grew up to nearly half a minute. Behind Van der Haar, Nieuwenhuis had dropped Van Kessel and he seemed on his way to bridge up.

“I felt like I was maybe able to get back to Mathieu but then I crashed and the two others were back on my tail. It went much better than I expected. I have a few difficult weeks behind me. I feel like I’m back on the right track,” Van der Haar told ad.nl.

Van Kessel had a difficult day and surprisingly he would be one of the Dutch top riders who would not get on the podium in Rucphen. Halfway through the race the podium spots seemed decided. Van der Poel kept negotiating the endless series of obstacles at high speed and he increased his lead over Van der Haar, who himself kept riding away from Nieuwenhuis.

Van der Poel took it relatively easy in the final laps, shifting back to the pace of chaser Van der Haar. After more than an hour of racing Van der Poel rolled to the finish line. No major celebrations as he won title number six in the elite category. Mission accomplished. The focus will now turn to his World championships title defence in Dübendorf on February 2.

“Tomorrow there’s the race in Otegem and then a training camp in Spain. I’ll be the top favourite in Dübendorf but I’m already used to that. I’m looking forward to my title defence,” Van der Poel said.

Nieuwenhuis was content with his third place. “Most of the previous races I was the fourth Dutch rider in the race so this is a bit of a surprise. The carousel was quite confusing and I could’ve used an aspirin. I felt like I was much closer to Lars in the carousel but when I came out of it he was gone again. The focus has been on the world championships race all season long so this is a bonus,” Nieuwenhuis told ad.nl.