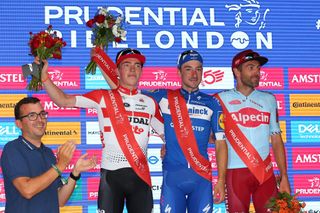 The cancellation of the men's RideLondon-Surrey Classic WorldTour race on August 18 has created a hole in the revised men's WorldTour calendar that could lead to another important one-day race moving to the summer slot.

Race organisers have been squabbling for the best dates in the revised race calendar but the UCI eventually drew up a WorldTour calendar that starts with Strade Bianche on August 1, if the COVID-19 pandemic is under control and local authorities allow racing to take place. The Tour de France scheduled for August 29-September 20 and the Giro d'Italia for October 3-25. The 18-stage Vuelta a España will be held from October 20 to November 8, with the cobbled and Ardennes Classics also packed into October.

Further changes to the different race calendars are expected, especially if the Road World Championships are unable to take place in Switzerland between September 20-27. The races could be moved to somewhere in the Middle East later in the year, with Milan-San Remo (currently scheduled for August 8), Il Lombardia (October 31) or Paris-Roubaix (October 25) perhaps moving to the August 16 date of the RideLondon-Surrey Classic.

A decision on moving the Road World Championships could be made in mid-June, when the UCI will also consider any changes to the men's and women's WorldTour calendars.

"Depending on this evolution, if need be, the UCI will make any necessary adjustments to the 2020 calendars for the UCI WorldTour and UCI Women’s WorldTour at the next meetings of the Professional Cycling Council and UCI Management Committee, to be held respectively on 9 and 10 June," the UCI said.

Cycling is booming in Britain and especially in London due to the need for safe public transport that limits the spread of the COVID-19 coronavirus. However the Prudential RideLondon festival of cycling was cancelled due to safety reasons. Close to 35,000 people have died during to the COVID-19 coronavirus, with Britain suffering the highest death toll in Europe.

"This summer we hope that millions of Londoners will alter their travel habits by making journeys by bike instead of driving or using public transport. But it is absolutely the right decision to cancel this year’s event to ensure the safety of everyone involved and we all look forward to welcoming RideLondon back again in the near future," the London Walking & Cycling Commissioner Will Norman said.

2020 marked the final year of Prudential's title sponsorship and Event Director Hugh Brasher admitted the festival could change format in the future. It is not clear if this will affect the men's WorldTour race and the women's race.

"With the current unknowns about the short-term future for mass participation events and the importance of inspiring as many people as possible to cycle more often, we’re taking the opportunity to fully review the format and timing of the event over the next few months," Brasher said.

He confirmed that entry fees for the rides would be refunded.