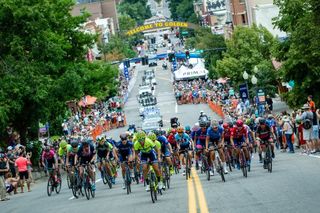 The UCI has revealed the full race calendars for the postponed 2020 season, confirming the races that hope to go ahead later in the year if the COVID-19 pandemic is under control and major sporting events are allowed to take place.

The UCI confirmed the men's and women's WorldTour calendars on May 5, with the Tour de France scheduled for August 29 to Septemeber 20 and the Giro d'Italia for October 3-25. The 18-stage Vuelta a España will be held from October 20 to November 8, with the cobbled and Ardennes Classics also packed into October.

WorldTour racing is scheduled to begin on August 1 with Strade Bianche but European men's racing could return early in July with the Sibiu Cycling Tour in Romania between July 2-5. In the USA, the ASWD Twilight Criterium is scheduled for July 11.

Milan-San Remo is confirmed for August 8, with the Critérium du Dauphiné listed for August 12-16, offering key preparation for the Tour de France. National championships will be held on August 22-23 in a number of countries, including Canada and Spain but other nations are not listed and have still to be confirmed.

The cancellation of Dwars door Vlaanderen, which Flanders Classics confirmed on Tuesday, means that Scheldeprijs will now take place on Wednesday, October 14, in between Gent-Wevelgem and the Tour of Flanders. The cobbled Classics clash with the Giro, which also overlaps on the calendar with the Vuelta a Espana. Tirreno-Adriatico and the GP de Montreal and GP de Quebec take place during the Tour de France.

The women's pro calendar gets going on July 26 with the Durango-Durango Emakumeen Saria. As part of the revised Women's WorldTour, La Course by le Tour de France moves to August 29, on the opening stage of the Tour de France in Nice. The women's season closes out with the Ceratizit Madrid Challenge by La Vuelta on November 6-8.

Curiously, the Hammer Hong Kong is now listed under a new category, 2.1S - special format. In March, Velon scrapped the series after a bitter dispute with the UCI.

The new race calendars include the UCI ProSeries, Class 1, Class 2, UCI Nations’ Cup, Under-23 and Junior categories and even criteriums. In total, new dates were found for 91 events (61 for Men Elite, 19 for Women Elite, 6 for Men Under-23, 4 for Men Junior, and 1 for Women Junior).

Almost a 1,000 races have been postponed or cancelled since March – the equivalent of 45 per cent of the UCI International Calendar, with 40 per cent of road races hit by the COVID-19 pandemic and the need to restrict public contact to limit the spread of the virus.

Due to the ongoing fight against COVID-19, the UCI warned that changes and cancellations could occur.

"As the security of the athletes and all parties involved remains the priority of the UCI and its partners, the men’s and women’s professional road calendar is under constant evaluation to keep abreast of the evolution of the world health situation," the UCI said announcing the race dates.

A decision on moving the UCI Road World Championships from Switzerland, possibly to Qatar, could be made in mid-June, when the UCI will also consider any changes to the men's and women's WorldTour calendars.

"Depending on this evolution, if need be, the UCI will make any necessary adjustments to the 2020 calendars for the UCI WorldTour and UCI Women’s WorldTour at the next meetings of the Professional Cycling Council and UCI Management Committee, to be held respectively on 9 and 10 June," the UCI said.

"We have just taken a new and important step towards a return to cycling competitions. After the calendars for the UCI WorldTour and UCI Women’s WorldTour, and that for mountain bike, the athletes, teams and all stakeholders now have the entire 2020 UCI International Road Calendar," UCI President David Lappartient said.

"I thank our partners and in particular our National Federations, for enabling us to establish these new dates as quickly as possible. However, we know that these dates, as important as they are, remain subject to modification depending on the development of the pandemic in the coming weeks and months. We will adapt to any context if necessary but can be pleased that our sport is progressively defining an overall framework enabling us to anticipate a return to normal."