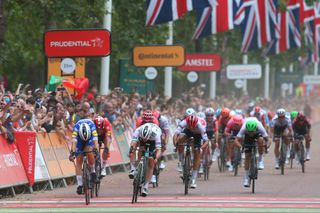 The organisers of RideLondon-Surrey Classic and RideLondon Classique announced Thursday that Prudential will end its title sponsorship of the event this year and that they are looking for new financial backers for 2021.

Prudential has provided the title sponsorship of the race since the 2013 edition and will continue through this year’s race scheduled for August 16. The race has been part of the men’s and women's WorldTour since 2016.

"As the founding headline sponsor of the Mayor of London’s event, Prudential has played a hugely important part in building RideLondon into the world’s greatest festival of cycling," said Hugh Brasher, Event Director for London Marathon Events.

"In 2019, RideLondon featured more than 100,000 riders participating in seven different events on closed roads in London and Surrey, including UCI WorldTour men’s and women’s races with more than five hours of live coverage on BBC TV. Over the years, the festival has inspired more than 100,000 new or lapsed riders to take up cycling.

"It has been a wonderful seven years and we would like to thank everyone at Prudential for their huge support of RideLondon. There is now a unique opportunity for a new partner to help us in the evolution of this extraordinary event, which can play a key role in shaping the health and well-being of future generations."

Organisers of RideLondon have already taken a hit when the UCI announced last summer that its women's Classique event would not be part of the 2020 Women's WorldTour. RideLondon moved its race date for this year to avoid conflict with the Tokyo Olympic Games, but it overlapped with the Ladies Tour of Norway [August 13-16]. The UCI said it wanted to avoid race conflicts on the top-tier series.

At the time, Brasher said that he would try and re-open discussions with the UCI in hopes it will reconsider adding the one-day race back on the calendar for this year, to no avail.

Prudential RideLondon Classique offers equal prize money to its RideLondon-Surrey Classic men's event, and has been known for its push for equality among men's and women's cycling since it joined the Women's WorldTour in 2016. Last year, it offered €100,000 for its women's one-day race, and winner Kirsten Wild took home €25,000.

Brasher told Cyclingnews, at the time, that this year's race would be held on a new 12km circuit, seven laps for a total of 84km. He also said that organisers would offer a team appearance fee equal to the men's WorldTour, continued live TV coverage, and its €100,000 prize purse.

Although this year's race was not added back onto the Women's WorldTour, it has secured 1.Pro status and will be held on August 15, the day before the men's race.

RideLondon is not the only British event in search of new title sponsorship. Organisers of the Tour of Britain (2.HC) and Women’s Tour (Women's WorldTour) announced that OVO Energy will end its title sponsorship of the events and that they are searching for a new leading financial backer.