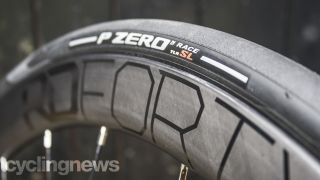 Pirelli has launched two new tubeless versions of its all-round race tyre, the P Zero Velo. Developed to take advantage of tubeless technology, the new road bike tyres are claimed to outperform every other road bike tyres that the Italian tyre specialist has previously produced, including tubulars.

Previously Pirelli only offered the endurance orientated Cinturato Velo tyre in a tubeless road tyre format. However, after three years of development and working with world tour riders from Mitchelton-Scott and Trek-Segafredo, Pirelli has now brought the advantages of tubeless technology to a performance race tyre.

There have been whispers for a while that the brand was working with WorldTour teams in the development of a tubeless tyre to complete the range and we reported a sighting of the not-yet-released tyre fitted to Mitchelton-Scott's Annemiek van Vleuten's training bike back in March.

Pirelli has also updated the rubber compound for the new tubless P Zero tyres, now using a Smart Evo compound which Pirelli claims to improve grip in dry and wet conditions whilst still maintaining low rolling resistance. The tread pattern differentiates between the two tyres, the P Zero Race TLR features the already existing compressed-Z-tread pattern but the SL version uses a smooth textured surface with two sipes that run around the centre of the tyre.

Pirelli is offering several sizes ranging from 24c to 30c for the standard models and 24c to 28c for the SL iteration. For a better fitting experience, Pirelli has developed rim compatibility using ETRTO standards and the tyres have been optimised for modern wide rims. For riders looking to confirm clearance required, Pirelli provides the width (WAM) and outer diameter (RAM) of the tyres when fitted to 17c, 19c and 21c ETRTO rims.

In terms of weight, the P Zero Race TLR SL 700x24C is the lightest version competitively coming in at a claimed 230g whilst the heaviest P Zero Race TLR 700x30C tips the scales at 320g.

We have our hands on a pair of P Zero Race TLS SL tyres already and once we have got some miles in, we will be bringing you a full review.