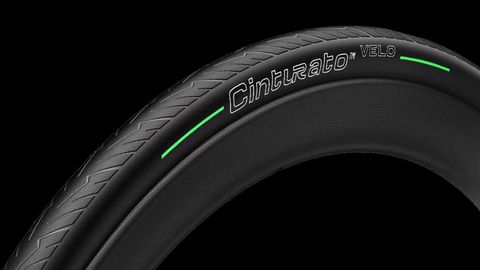 Excellent puncture proofing and wet/cold grip, with smooth low-pressure feel, but steady rather than speedy

Pirelli’s Cinturato tubeless tyre is the final piece in its Velo range's return to road cycling and it’s a great option if you want extra puncture protection, cornering confidence and great ride feel at a bargain price. Our test tyres were 28c in width, and were relatively quick considering the level of protection.

Installation of tubeless tyres still scares a lot of people but the Pirellis are easy enough to work with. Popping them on and off without levers is a rather simple exercise, granted you know what you’re doing. We only had to use the compressor rather than the track pump a couple of times when switching between bikes in our six-month test period.

The full bead-to-bead Armour Tech nylon layer also means they’re super stable at very low pressures and our experimentation (commuting miles can be boring okay) took us as low as 40 psi without them getting unpredictable. They feel more than capable at that pressure too (as long as you don’t lean too heavily on the front on climbs) although we generally run them at 60 psi front 70 psi rear (70kg rider with 5kg of kitbag).

An aramid puncture layer under a super thick 3.7mm tread depth meant we never had to change the tyres to fix flats despite a meld of urban and rural commuting of hundreds of miles. The MotoGP-derived broadside sipe tread is still split and cut free despite our pothole, rock debris and glass-strewn test route.

Despite the thick tread and extra protection layers, the tyres are a decent weight (10g less than Continental GP 5000 TL) and it actually blows up larger than listed so there’s plenty of volume to deal with big holes and other debris. Unlike a lot of enhanced-toughness tyres, they still feel pretty good with a nice balance between buoyantly floated and tactile that lets you make the most of the SmartNet Silica rubber compound.

This motorsport-derived mix feels trustworthy straight away and the more we’ve ridden it through the worst conditions Yorkshire has thrown at it (you remember the 2019 UCI Road World Championships right?) the more they've proven their credentials. They're superb - staying connected, composed and communicative where other tyres would leave you sliding down the road.

Unsurprisingly there is some trade-off in terms of rolling speed compared to the fastest 28mm all-rounders from Continental, Schwalbe and Specialized when you start monitoring wattages in back-to-back test rides. It’s slightly quicker than the puncture-proof rival, the Continental Gatorskin, and doesn’t feel as wooden and numb either. On the whole, the Pirelli Cinturato Velo tyres are very well priced considering their premium performance, especially as that extra tread depth translates to extended wear life.