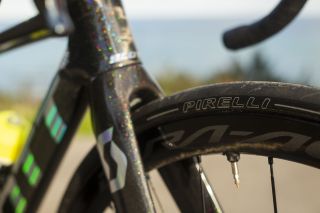 Pirelli is in the final prototype testing phase of its new P Zero Velo tubeless road tyres. In recently announcing a reconfirmation of the brand's partnership with Mitchelton-Scott - both the men's and women's rosters - Pirelli has also announced the teams are working together with Pirelli technicians on further performance improvements and final tuning of the P Zero Velo tubeless tyres.

The Italian performance rubber brand has made a strong return to cycling since 2017, but the one product has remained elusively unreleased, is a premium tubeless road tyre.

The tyres that Annemiek van Vleuten raced on at the recent Classic, Omloop Het Nieuwsblad, were Pirelli P Zero Velo tubular road tyres, which are currently only available to professional riders. It is Annemiek’s training bike, though, which is of a lot more interest for followers of the Pirelli brand keen on running tubeless.

The Dutch cyclist is currently logging her non-competition mileage on a set of prototype P Zero Velo tubeless tyres. Images released by the Mitchelton-Scott team, has revealed a bit more about these tyres.

Although Pirelli is not divulging specific details about its P Zero Velo tubeless development, there are definite clues in the tread and appearance of Annemiek’s tyres.

From the images released in January of Annemiek van Vleuten's Scott Addict RC Disc, there is a definite compressed-Z-tread pattern visible, and the archetypal yellow logo is replaced with a grey outline of the Pirelli brand name.

As is tradition in truly great tyre design, it is often a case of reinvention, instead of revolution. Pirelli designers appear to have taken inspiration from previous road bike tyre designs executed by the brand. There are also visible sipes for moisture displacement.

The tyres on Annemiek van Vleuten’s Mitchelton-Scott training bike appear to be of a slightly higher volume, too. This would be aligned to the trend of tubeless road rubber being designed to run lower pressures, for optimised rolling resistance.