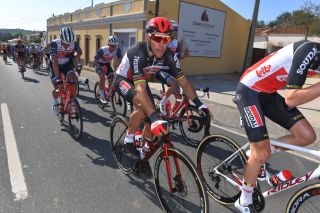 It may all end tomorrow. Strade Bianche marks the resumption of the WorldTour calendar after a four-and-a-half-month hiatus but Philippe Gilbert (Lotto Soudal) is mindful that every race on the revised UCI schedule could be the last. Such is the precarious reality of bike racing amid the COVID-19 pandemic.

“I think that’s the mentality you need to have at the re-start to this season, to say that every race could be the last race, because unfortunately, that’s the reality,” Gilbert told reporters on a video call on Friday on the eve of Strade Bianche.

“It’s going to be difficult to organise. You need to ride every race like it could be the last and not make too many plans for the future. You have to be very opportunistic.”

Most European countries have emerged gradually from lockdown over the past two months, but over the past week, there have been fresh reports of rising numbers of confirmed coronavirus cases, as well as a re-imposition of travel and quarantine restrictions in some jurisdictions. At this week’s Vuelta a Burgos, five riders from two teams were withdrawn from the race as a precaution after they had contact with possible COVID-19 cases.

How to watch Strade Bianche

Strade Bianche to be raced under a scorching Tuscan sun

Although Gilbert, like most of his peers, has a packed schedule of racing planned for the coming months, he is keenly aware that, in the circumstances, the compressed calendar is still written in pencil rather than set in stone.

“It’s possible that in ten days or three days we could be stopped again,” Gilbert said. “We’re living with uncertainty, like every profession – and maybe even more so, because sport isn’t a necessity.”

It all adds to the importance of Strade Bianche, which Gilbert won in his annus mirabilis of 2011. On that occasion, the Belgian already had a full month of racing in his legs, not to mention confirmation of his sparkling condition in the form of a stage win at the Volta ao Algarve. This time out, Gilbert and his rivals will line up in Siena with no form line to speak of, but he expects to the general level to be high on the gravel roads of the Crete Senesi.

“Everyone’s had a chance to rest and then build up again, plus it’s been easier to train in summer weather than in winter,” said Gilbert, who also expects to see familiar names to the fore in the finale. “In the few days that racing has been back, the riders who were winning before the break are still winning. The best riders are still the best and that’s reassuring.

“There haven’t been surprises so far, it’s still Bora and Deceuninck who have beating the others, like they did at the start of the season.”

Strade Bianche is the first of a trio of Italian races on Gilbert’s schedule, with Milano-Torino and Milan-San Remo also on his agenda, but he downplayed the idea that Saturday’s trek across the gravel roads of Tuscany was merely a warm-up for La Classicissima.

“Every race is important because there are only big races from here on in. I’ll try to do the best I can and hopefully win at least one nice one, that would be great,” said Gilbert, though he acknowledged that there is a particular emphasis on Milan-San Remo, the lone Monument missing from his palmarès.

Like his manager John Lelangue, Gilbert expressed dismay at RCS Sport’s decision to reduce team sizes from seven riders to six in order to issue late invitations to Italian ProTeams Androni-Sidermec and Bardiani-CSF.

“It’s unacceptable. If it was because of the current [coronavirus] situation, then we’d all understand, but it was just to give places to two more teams,” Gilbert said. “That’s not an acceptable reason, especially for WorldTour teams, who pay for the WorldTour licence and make sacrifices all year.

“Going from eight riders to seven in the Classics was already a big change, but six riders is now really the limit. The next step would be just to become an individual sport and stop racing with teams.”

Gilbert was more enthusiastic about the possibilities that could emerge as a result of the changes to the Milan-San Remo route. Following objections from mayors on the Ligurian coast, the race has been rerouted through the Langhe hills of Piedmont. Though the new route means the Turchino and the early capi no longer feature, Gilbert wondered if it might provide a more demanding preamble to the traditional finale over the Cipressa and Poggio.

“Before, Milan-San Remo had 150km that were almost like being on a motorway. You could ride them in cruise control at 45-50kph every year and nothing happened,” Gilbert said. “Now, I have the impression it will be a bit more technical and sinuous. With the heat, too, it will be tough, and those elements could change the race.”

After his Italian expedition, Gilbert is scheduled to ride the Tour de Wallonie before returning to the Tour de France after surprisingly missing out on selection in his final season at Deceuninck-QuickStep in 2019.

Like every other race on the revised UCI calendar, he believes the Tour will take place beneath a sword of Damocles, with a consequent effect on the strategic approach of the overall contenders. If every stage could be the last, Gilbert reasoned, then the general classification could be settled very abruptly indeed. He expects the GC contenders to be aggressive from the outset.

“I think everyone knows that there is a big chance the Tour will not be able to go to Paris because if people are sick, they will have to stop, so I think the fight for the yellow jersey will be very important,” Gilbert said.

“If you imagine that the Tour has to stop after ten days, then the guy who will have the yellow jersey at that point will win the race. I think everyone knows that, so that’s the big difference. I don’t think people will wait for the last three days like they usually do. I think it’s going to be really different.”

In a season of such uncertainty, in other words, every day must be seized. Starting with Strade Bianche.