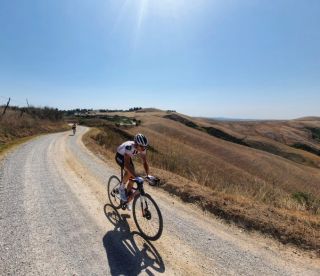 Strade Bianche will be held under a scorching Tuscan sun on Saturday, with temperatures forecast to be 37°C (98.6°F) in the Siena area during the race.

The event is traditionally held in early March, when temperatures are usually around 10°C and cold rain often soaks the riders and covers their faces in mud. The riders will face weather of a different extreme this year.

Meteorologists have suggested that this will be the hottest week of the Italian summer, with thunderstorms and cooler temperatures expected in Italy from Tuesday. It is forecast to be a much more acceptable 29°C next Saturday for Milan-San Remo.

How to watch Strade Bianche

Kwiatkowski: Strade Bianche gravel will be dangerous and risky

Riders are now protected from dangerous weather conditions by the UCI Extreme Weather Protocol, whereby riders, a team, race organiser or the race officials can question if it is right to race. Options include different start and finish times, reduced race distances, neutralization of a part of the race or even cancellation.

However, with Strade Bianche the first race of the rescheduled WorldTour calendar and the risk that other races could be cancelled due to the COVID-19 coronavirus pandemic, nobody is expected to call for action that damages the race, despite the high temperatures. Being a one-day race also helps riders and teams accept and mitigate for the heat.

"There's always talk about the Extreme Weather Protocol but at the end of the day, it's fair enough to still ride," Philippe Gilbert, often a spokesman for the peloton, said on Friday during his online video press conference.

"Everyone is used to this temperature and everyone was training at home in the same conditions. If you can train, you can also race. I support the idea of starting, of racing."

Riders got a taste of the high temperatures and the scorching Tuscan sun during their final recon rides on Thursday and Friday. Some teams headed out early to avoid the heat but others rode during the morning, understanding that hydration will be vital.

At Strade Bianche, the men ride 63km of the 184km route on gravel roads and the women cover 31.6km of gravel during their 136km race, which makes going back to team cars for bidons virtually impossible, especially in the final two hours of racing when they will be most needed.

"During the recon ride we drank three to four bottles during a 60km ride, so if you have to do the same in the race, we'll need a lot of support from the side of the report. That's going to be the key," Gilbert said.

"I think if you miss one or two bottles, your race can be over because you overheat and with this extreme weather, if you go over your limits once, your body will never recover.