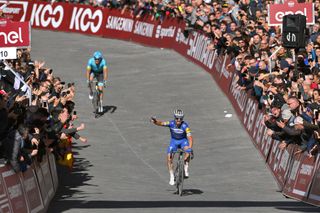 Take two. In March, Strade Bianche was the first domino to fall. As the coronavirus epidemic gripped Italy, RCS Sport was forced to postpone the Tuscan race, with Milan-San Remo, Tirreno-Adriatico and the Giro d'Italia quickly following. Barely a week later, as COVID-19 continued to spread across Europe, the entire cycling season had been suspended and it seemed unlikely that racing would resume at all in 2020.

Even when the UCI published a revised calendar in May, it appeared an exercise in optimism, but, somehow, the international season restarted quietly at the Sibiu Tour last week and continues with the Vuelta a Burgos, which gets under way on Tuesday. The WorldTour calendar, meanwhile, kicks back into action in Tuscany on Saturday with the rescheduled Strade Bianche.

While professional cycling has been doing what it can to be ready for competition in the age of COVID-19, there remains a nagging sense that the global situation is not yet ready for professional cycling, with its international pelotons and frequent cross-border travel. The WorldTour will resume on Saturday, but can the house of cards really keep standing all the way to the final day of the Vuelta a España on November 8?

Such doubts only add weight to Strade Bianche and the major one-day events in Italy on the following two weekends. Strade Bianche, Milan-San Remo and Il Lombardia will surely be raced with a particular intensity: each one, after all, could end up being the last race of the year.

Now in its 14th year, Strade Bianche began life as L'Eroica, inspired by the sportive of the same name on the gravel roads in Crete Senesi in the hinterland of Siena. The first edition was held in October 2007, but it was shifted to March the following year, when RCS Sport realised it made sense to place it immediately before Tirreno-Adriatico – not to mention Milan-San Remo and the cobbled Classics.

Strade Bianche quickly established itself as a race of considerable prestige in its own right, helped by a cadre of marquee winners (Fabian Cancellara, Philippe Gilbert, Michal Kwiatkowski), always aggressive racing and probably the most beautiful finish line in cycling on Siena's Piazza del Campo.

Tiesj Benoot's victory in the arduous, snowbound edition of 2018 perhaps marked the point where Strade Bianche, despite its youth, came to be acclaimed more generally as a Classic. And, in 2020, there is no more fitting place to restart the most precarious of WorldTour seasons.

Into the unknown. Given the lengthy hiatus, contenders for Strade Bianche can only be assessed on pedigree rather than form. Some riders have the remarkable ability to hit the ground running after a long stint of training. Others need to feel their way back into competition. The conditions, too, will be unlike anything riders have encountered in past editions of the race – the forecast is for temperatures touching 36°C on Saturday, while the plumes of dust may be heavier than normal.

Yet for all the known unknowns, Deceuninck-QuickStep are usually guaranteed to make a big impression on a one-day race, and the Belgian squad's roster for Strade Bianche is a deep one. Defending champion Julian Alaphilippe and 2015 winner Zdenek Stybar lead the line, while Kasper Asgreen and Bob Jungels provide further options.

Wout van Aert (Jumbo-Visma) has posted some eye-watering statistics on Strava in recent weeks, and the Belgian will be expected to hit the ground running in Tuscany, where he has placed on the podium in each of his two appearances to date in his still nascent road career. His cyclo-cross rival Mathieu van der Poel (Alpecin-Fenix) will make his debut at Strade Bianche, and the race could be the first chapter of a duel that defines one-day racing in this compressed calendar.

Peter Sagan (Bora-Hansgrohe) has all the attributes to win in Siena, but he has perhaps lacked the sharpness to do so given that he so often rode the race immediately after a long block of altitude training. This time out, his preparation will be equivalent to that of his rivals.

As ever, Strade Bianche attracts potential winners with a wide array of characteristics. Jakob Fuglsang (Astana) placed second a year ago, while puncheurs like Michael Woods (EF Pro Cycling) and Diego Ulissi (UAE Team Emirates) have the potential to shine. It will be intriguing, too, to see what riders with designs on three-week glory can achieve on Saturday, with Tadej Pogacar (UAE Team Emirates) and Vincenzo Nibali (Trek-Segafredo) in action.

The relative brevity of Strade Bianche's 184km course is misleading. Its interminable succession of rolling hills and its 63km of dirt roads make for a long, long day in the saddle, while the 11 gravel sectors are dispersed relatively evenly along the route, leaving precious little respite.

The first gravel sector comes after just 11km, and it's followed immediately by a 5.8km stretch at Ville di Corsano that includes slopes of 10%. Sector 4 at La Piana is similarly long (5.5km), and that serves as a preamble to the paved climb to Montalcino (4km at 5%). Over the other side, riders encounter almost 20km of gravel between sectors 5 and 6, before they hit the race's midpoint and the feed zone.

Sector 8 at Asciano comes with 54km to go, and it signals the beginning of the finale. The 11.5km sector of dirt road is the most technically demanding of the race, and inevitably forces lasting splits. Sector 9 is just 800m long, but the steep gradient makes it a launchpad for attackers. The final two sectors of gravel road are also largely uphill. The Colle Pinzuto (2.4km with pitches of 15%) comes just 17km from the finish, and it's followed by Le Tolfe, where the gradient rears up to 18%.

Just 12km remain, but there are still obstacles ahead, most notably the leg-stinging climb into Siena's historic centre by way of the Via Santa Caterina, whose 16% slopes have so often made the difference in the past. The final drop into the Piazza del Campo is short and but requires care; in the event of a sprint, being first into the final bend is essential.

Ordinarily, a raucous cheer greets the leaders as they enter the Piazza del Campo. On Saturday, however, the striking medieval square will be off-limits to the public. The atmosphere will be rather more subdued. A reminder, as if it were needed, that while bike racing may be back, normality is still a long way off.