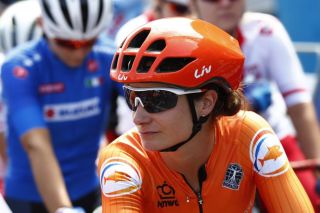 Just two weeks out from surgery to correct a nod in an artery in her groin, multi-time, multi-discipline world champion Marianne Vos (CCC-Liv) posted a video of herself from Tenerife, Spain, training on an elliptical walking machine.

The smiling Vos is soaking up the sunshine in the Canary Islands as she restarts her training for the 2020 road season, which is already underway for ,many of her competitors.

"On Tenerife now catching some sun and happy to do a bit of alternative 'training' during the recovery process," Vos wrote in a post on Instagram. "Walks on the island and great to have another way to exercise with this eye-catching ElliptiGO."

Vos announced that she would end her cyclo-cross season early directly following her fifth-place finish at the Dutch Cyclo-cross Championships last month. In a statement posted on the team's website, she indicated that she had been struggling with a "nod" in an artery in her groin for some time. After consulting with a doctor, she decided to have surgery to correct the problem as soon as possible.

If Vos' recovery stays on track, she should be able to fly into the new road season with CCC-Liv and the Dutch national team ahead of selection events like the Tokyo Olympic Games in July and the UCI Road World Championships in Switzerland in September.

"In cooperation with the team, I am working on a recovery process in order to achieve my goals during the road season," she said in a statement previously posted by her team.

Vos had one of her most successful road seasons in 2019, which ended with 19 victories. Among her most high-profile wins, the 32-year-old took four stages at the Giro Rosa, plus three stages and the overall at the Ladies Tour of Norway. She also claimed victory at one-day races Trofeo Alfredo Binda and La Course by Le Tour de France.

Vos ended the season as the winner of the 2019 Women's WorldTour.

Just over two weeks after surgery and the recovery is going well. On Tenerife now catching some sun and happy to do a bit of alternative 'training' during the recovery process. Walks on the island and great to have another way to exercise with this eye-catching ElliptiGO. Thanks @elliptigobenelux & Cremers Sport giving me the opportunity to go out on the road and work on my fitness in this recovery period. #RideForMore #outsideisfree #happycamper #LivForward Marianne Vos