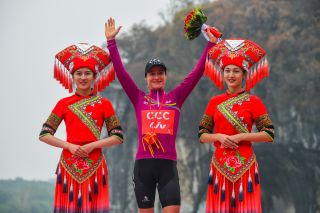 Marianne Vos (CCC-Liv) clinched the 2019 Women's WorldTour title at the Tour of Guangxi thanks to taking third place in the bunch sprint in Guilin. The Dutchwoman grabbed 125 UCI points as a result, vaulting her over world champion Annemiek van Vleuten (Mitchelton-Scott), to clinch the title by just over 124 points.

Vos came close to adding to her tally of 19 victories in 2019, launching her sprint first on wet roads. The 32-year-old surged to the front but was passed by winner Chloe Hosking (Alé Cipollini) and runner-up Alice Jackson (Team Tibco-SVB) at the line. Still, she accomplished the main goal of the day, she said.

"It hasn't really been a goal throughout the season," Vos said of the Women's WorldTour title after celebrating with her teammates at the finish. "But I have to admit that now I was so close it was definitely a goal to get in that position and grab those points.

"I went second or third through the last corner and then I just opened up. I couldn't keep it through the finish, but it was OK for me. I'm satisfied, and the biggest goal was to take six points, so that's nice."

Vos was especially grateful to her team for helping her along the way, in a season that has seen her achieve her highest win total since 2014. Successes along the way included four stages at the Giro Rosa, plus three and the overall at the Ladies Tour of Norway, as well as the Trofeo Alfredo Binda and La Course by Le Tour de France.

"I'm very thankful for the team, not only for this race, but for the whole year. They helped me in all those WorldTour races, so I've been able to take these consistent results through the season to take the overall.

"I'm very satisfied. It has been a very good season. I felt good during the winter and then of course I hoped that it will turn out in the results, but yes, it was better than expected."

With a long season now over, one would imagine Vos would be looking forward to a break from the bike. But, to the contrary, she is staying in Asia with her team, first to visit team sponsor Giant, then to ride the Taiwan KOM Challenge and recon the Tokyo Olympics course.

The cyclo-cross season will be next on the menu. While last season brought her seven wins in the mud – including five by the end of October – this year she'll start her 'cross campaign later.

"[After Asia] I'll take some holiday and do some cycling," she said. "Then in December I'll be back in cyclo-cross."

Marianne Vos, Women's WorldTour champion – it's a fitting end to her 2019 season, and something of a surprise that it isn't already part of her palmarès. What's less of a surprise, though, is that she now holds the crown, and going by this year, there's no sign of her slowing down at all.