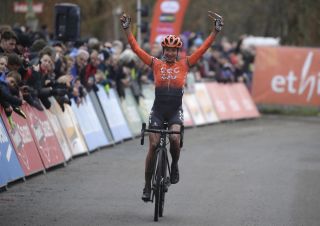 Marianne Vos (CCC-Liv) returned to cyclo-cross on Saturday after a ten-month hiatus and she got her winter off to a winning start with a dominant victory at the Ethias Cross in Essen, though she insisted that she did not expect to repeat that result in her forthcoming races, such as the World Cup in Namur on December 22.

The Dutchwoman’s last cyclo-cross outing had been the World Championships on the opening weekend of February, where she took bronze. After winning the 2019 Women's WorldTour on the road, she delayed her cyclo-cross debut until December, but she quickly hit her stride on the muddy course in Essen on Saturday. She finished a minute clear of 18-year-old Hungarian champion Blanka Kata Vas (Doltcini-NM Transport), with Anna Kay (Experza) taking third.

“It’s usually difficult at the start of your first cross, and that was the case today too, but I was able to handle it very well,” Vos said afterwards, according to Het Nieuwsblad. “However, I have enough experience to realize that in the coming races I won't compete for the win.

“In Namur, for example, it is a completely different course and the level of opposition is also higher than today. It may sound strange, but in the first place, I don't look at the competition, but at myself. For me, the feeling that I was left with from this cross was more important than the result. However, both were good, and so I can look to the future with confidence.”

Vos hit the front early on Saturday in the company of Ellen Van Loy (Telenot Baloise Lions) and the pair established a gap over the rest of the field. Although Vos was looking to mete out her effort carefully, she was compelled to ride solo from distance when Van Loy ran into difficultly and rode into the barriers at the midpoint.

“I immediately went full speed ahead at the start, but after a lap and a half I stepped off the gas because I absolutely didn't want to run the risk of overdoing it,” Vos said. “Together with Van Loy I was in the lead, but when Ellen made a small mistake, I had no choice and I had to keep going.

“After that, I set a pace that I thought I could hold on to the end and I succeeded. This is a result that I had not dared to predict beforehand. I wondered if I was ready to put down a good performance right away. I knew that it could go well in my first race, but it might just as easily have been disappointing. Fortunately, it was the former."

Vos will attend her CCC-Liv team's pre-season training camp for the next ten days, before returning to cyclo-cross action at the Namur World Cup. She is then scheduled to ride at Zolder on December 26 and in the final round of the World Cup in Hoogerheide on January 26. Vos will also ride the GP Brussels round of the DVV Trofee on January 5 and the Dutch national championships a week later, as well as the World Championships in Dübendorf on February 2.