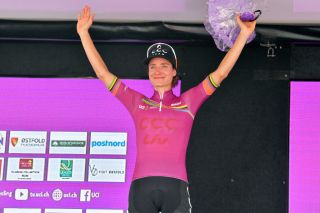 Marianne Vos has been released from hospital after undergoing successful surgery to correct a nod in an artery in her groin on Thursday. The multiple world champion had the operation performed in consultation with her CCC-Liv team and will need six weeks to recover before beginning preparations for the 2020 road season.

"The procedure went well. I left the hospital with a smile and flowers," Vos reported on her social media channels on Friday. "I feel good and not in much pain. The rehabilitation process can now begin, carefully and gradually. I look forward to working towards my goals later this year."

Vos announced that she would end her cyclo-cross season early directly following her fifth-place finish at the Dutch Cyclo-cross Championships last Sunday. In a statement posted on the team's website, she indicated that she had been struggling with a nod in an artery in her groin for some time. However, after consulting with a doctor, she decided to have surgery to correct the problem as soon as possible.

Vos said she will require six weeks recovery time, which will put an end to her cyclo-cross season. She will not compete in the next two World Cup rounds in Nommay and Hoogerheide, nor the UCI Cyclo-cross World Championships in Switzerland in February.

Her plan is to recover within six weeks and then begin preparing for the upcoming road racing season with CCC-Liv and the Dutch national team ahead of selection events like the Tokyo Olympic Games in July and the UCI Road World Championships in Switzerland in September.

"If everything goes according to plan, I can burden my body again six weeks after the procedure," Vos said in her statement ahead of the planned surgery last week.

"In cooperation with the team, I am working on a recovery process in order to achieve my goals during the road season. However, a successful operation has top priority at the moment."

Vos had one of her most successful road seasons during 2019 that ended with a total of 19 victories. Her biggest achievements included four stages at the Giro Rosa, plus three and the overall at the Ladies Tour of Norway, as well as the Trofeo Alfredo Binda and La Course by Le Tour de France.

Vos ended the season as the winner of the 2019 Women's WorldTour.

Surgery went well and left hospital with a smile (and flowers😊). Feeling good and not much pain. Many thanks to #mmcveldhoven for the good care. Now the recovery process can start; careful and steady. Looking forward to build towards my goals later this year. Marianne Vos