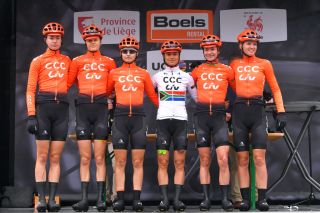 CCC-Liv emerged in 2019 from Marianne Vos' Waowdeals team after the organisation merged with the revamped BMC Racing men's WorldTour team operation under the banner of the Polish sponsor. The team added a few hitters including Ashleigh Moolman-Pasio, but it has been Vos who has claimed the majority of the team's wins in 2019. Vos racked up 19 of the 22 victories in 2019, with Moolman-Pasio and Marta Lach the other winners.

Vos was the clear leader of the team in 2019, taking the reins in the Trofeo Alfredo Binda, and more wins in the Tour de Yorkshire, La Course by le Tour de France, Ladies Tour of Norway and Tour Cycliste Féminin International de l'Ardèche to win the UCI Women's WorldTour overall.

But for Vos to shine, the team had to have depth of talent, and while Moolman-Pasio struggled to make the top step of the podium, she rode to third in the Setmana Ciclista Valenciana, Tour of California, was fourth overall in the Giro Rosa, fifth behind Vos in La Course and won the Emakumeen Nafarroako Klasikoa one-day race, the African Games time trial and the South African road race title.

Marianne Vos: A legend at age 32, Vos is the leader of the team. Having overcome overtraining and injuries, Vos has taken a back seat to other Dutch talents Annemiek van Vleuten and Anna van der Breggen when it comes to the national team, but shines in the CCC-Liv outfit.

Ashleigh Moolman-Pasio: The team's general classification contender, Moolman-Pasio is a top climber and superb time triallist who took second in the Giro Rosa in 2018.

Soraya Paladin: Paladin joins the team in 2020 from Alé Cipollini, where she claimed numerous top results including second overall in the Setmana Valenciana, third in Tour de Yorkshire, two stage wins and second overall in the Vuelta a Burgos, third in the Emakumeen Bira, a top 10 in the Giro Rosa overall, and a stage in the Giro Toscana and the overall Giro delle Marche in Rosa.

Marta Lach: The Polish rider showed her potential as a sprinter with a silver medal in the U23 European Championships and a stage win in the Festival Elsy Jacobs. She has made great strides since joining CCC-Liv from the amateur level so expect her development to continue in 2020.

With a rider like Vos to rally behind, CCC-Liv's strength lies in teamwork. They are a cohesive unit, doing plenty of work behind the scenes to put Vos and Moolman-Pasio into position to win. With the addition of Paladin, they will have more options for stage races, and they've added a few promising young riders like Aurela Nero, the Polish U23 time trial champion, and Agnieszka Skalniak.

With an inspirational leader like Vos, expect riders like Sofia Bertizzolo, who was fourth in the Tour of Flanders, to rise to new levels in 2020.

The team has relied on Vos to get results but no squad can count on a single rider when illness and injury come into play. Vos is still at her best at 32 but the team's younger riders will need to step up and show they can carry the torch in the future.

CCC-Liv might lack the depth of talent of Boels-Dolmans or Mitchelton-Scott, but they function well as a team and are united behind their leader. The team will likely rely on Vos and Moolman-Pasio to get results in the Women's WorldTour while continuing to develop its younger riders.