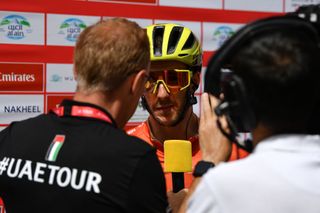 Race leader Adam Yates (Mitchelton-Scott) talks to the media ahead of stage 5 – which would turn out to be the final stage – of the 2020 UAE Tour (Image credit: Getty Images Sport)

A number of spring Italian races could potentially be in further danger of being cancelled after members of the co-organisers of the UAE Tour, RCS Sport, were set to be tested for the coronavirus on Friday.

A press release issued by the race organisers on Thursday evening, following the conclusion of stage 5 – won by UAE Team Emirates' Tadej Pogacar – announced the cancellation of the final two stages and confirmed the two cases of the virus. On Friday morning Adam Yates (Mitchelton-Scott) was confirmed as the overall race winner based on the results of stage 5.

"The decision has been taken to ensure the protection of all the race's participants. Safety comes at the top of all priorities," the statement read.

"In the meantime, the Ministry of Health and Prevention said that all the race's participants, administrative staff and organisers will be examined through the continuous periodic screening being conducted, and all needed procedures, including quarantine measures, will be taken to ensure viral suppression and curb the spread of its outbreak in coordination with all health and other authorities concerned in the country."

Pending the outcome of tests for the virus on the UAE Tour-participating teams' riders and staff, journalists and race organisers, everyone involved was being confined to their hotels in Abu Dhabi.

Ahead of the announcement of the two coronavirus cases at the Middle Eastern WorldTour event, RCS Sport said via social media earlier this week: "Regarding the three spring bike races – Strade-Bianche, Tirreno-Adriatico and Milano-Sanremo – RCS Sport reiterates that it is working hard to ensure the smooth running of these events.

"To this end, RCS Sport is in constant contact with the appropriate authorities and, in partnership with them, will assess taking all the most suitable measures for carrying out the sporting events."

Within Europe, Italy has been the hardest-hit country when it comes to cases of the coronavirus, with the BBC reporting a jump to 400 cases on Wednesday, with the British public service provider subsequently reporting on Thursday that there had been 17 deaths in the country.

The Lombardy region, which includes Milan, and the region of Veneto – both in the north of Italy – have been particularly badly affected due to two, possibly linked, clusters of cases.

At the UAE Tour earlier this week, Mauro Vegni, the head of RCS Sport, which also organises the Giro d'Italia, told Cyclingnews of his concerns for his stable of Italian spring races, and Milan-San Remo (March 21), in particular.

"Milan is one of the two key places that has recorded the most number of cases to date," Vegni said. "But we will follow all the guidelines from the government and the ministry of public health. For Tirreno [March 11-17], it's in a different place. It’s not like Venice or Milan, but what concerns me the most is around Milan because of the Lombardy situation.

"The deciding factor will be the number of cases and if the situation is under control," he said. "We also have to factor in geography. At this moment, in Tuscany, where Strade Bianche is held, it seems OK. At this moment, I don't think that there's a problem but we will monitor it."

Last week, cycling's world governing body, the UCI, postponed all races set to take place in China in April and May, while the women's edition of Strade Bianche – held the same day as the men's race, on March 7 – and the Trofeo Alfredo Binda women's race, held in Cittiglio, 70km north-west of Milan, on March 22, are also in danger of being cancelled.

The coronavirus – also known as COVID-19 – can lead to respiratory disease, which in turn can lead to complications, including pneumonia. So far, more than 80,000 people worldwide have been infected, with nearly 3,000 having died.