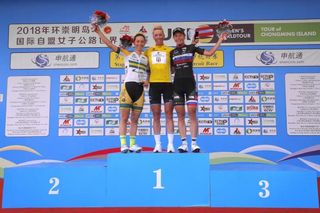 The 2020 Tour of Chongming Island will not take place as scheduled, as the UCI has postponed upcoming races in China in response to the coronavirus outbreak.

Cycling's governing body issued a statement on Friday, providing information on the virus and announcing the postponement of all UCI races in China in April and May.

The Tour of Chongming Island, a Women's WorldTour event, was due to take place from May 7-9 but will now be rearranged for a later date, which will be confirmed on March 15.

After the Tour of Hainan was postponed by its race organisation earlier this year, and two Chinese teams withdrew from the Tour de Langkawi, this latest development sees the UCI take matters into its own hands.

There have so far been 74,000 confirmed cases of coronavirus, resulting in more than 2,000 deaths. The novel virus, which causes respiratory problems and can lead to pneumonia, originated in Wuhan, in the province if Hubei in eastern China.

Cycling follows other global sports to have cancelled major events, including the World Athletics Indoor Championships and the Chinese Formula 1 Grand Prix.

"Bearing in mind the potential scale of the epidemic and the data provided on confirmed clinical cases, there are justifiable grounds for postponing all competitions until such time as epidemiological data are more reassuring," read the UCI statement.

"The UCI has taken the decision with the Chinese Cycling Association to postpone cycling events originally scheduled for April and May."

Unless the spread of the virus can be slowed, other races in China - and possibly beyond - could be at risk. The UCI will be particularly worried about October's Tour of Guangxi, which is the final event in the men's WorldTour and has been used to host the UCI gala in recent years.

Other races in China later in the year include the Tour of Qinghai lake in July, the Tour of Xingtai in August, the Tours of China and the national championships in September, and the Tour of Taihu Lake in October.

With the Rugby Sevens events in Singapore and Hong Kong having been postponed, there is also a risk to other events outside China, and there have been fears surrounding the Olympic Games in Japan this summer. Earlier this month, Tokyo 2020 organisers sought to play down the notion the Games could be postponed or cancelled, stating that such measures were not under consideration.

In regard to races outside China, the UCI said it would monitor 'delegations from countries at risk'.

"It is important for the UCI to watch over the health of all athletes participating in international races. That is why the UCI underlines the importance of strictly adhering to the recommendations given by the WHO, and the guidelines set out by the national authorities in charge of public health," read the statement.

"The UCI will gather information on the movements and the training locations of the members of these delegations (riders and staff members) in the three weeks leading up to the competition."