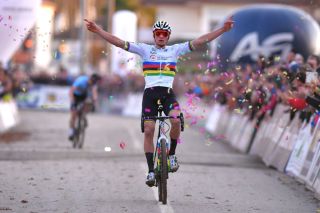 After having defended his title in the previous weekend's UEC Cyclo-cross European Championships, Mathieu van der Poel will be back in action at the World Cup and DVV Trofee (Image credit: Getty Images)

Following last weekend's UEC Cyclo-cross European Championships in Italy, this Saturday sees the UCI Cyclo-cross World Cup resume with round 4 in Tabor, in the Czech Republic, where Eli Iserbyt (Pauwels Sauzen-Bingoal) and Katerina Nash (Luna) will attempt to defend their overall leads.

Iserbyt could only finish second to a rampant Mathieu van der Poel (Corendon-Circus) at the European Championships in Silvelle, but clearly has form, as well as the confidence that comes with having won all three rounds of this season's World Cup so far.

However Van der Poel is set to start his first World Cup of the 2019/20 campaign as he targets individual success rather than overall victory.

Last year's winner in Tabor, Van der Poel, will race with the emotion that comes with having lost his grandfather, French legend Raymond Poulidor, who died on Wednesday.

Nash will start the elite women's race with the support of a home crowd in Tabor, but will surely be pushed hard by Pan-American champion Maghalie Rochette of Canada.

The Specialized-Feedback Sports rider won the opening round of the World Cup in Iowa City in the USA by just seven seconds from Nash before the Czech rider took the second round in Waterloo, Wisconsin, and with it the series lead, which she's held since.

Both riders will be up against 777.be's Annemarie Worst, who won round 3 in Bern, Switzerland, last month, and Lucinda Brand (Telenet Baloise Lions), who beat Worst for the win in Tabor last year.

24 hours after Tabor, Van der Poel and Iserbyt are due to clash for the second time at round 2 of the DVV Trofee series: the Flandriencross in Hamme, Belgium.

After a dash from the Czech Republic to Belgium, Iserbyt will be looking to defend his overall lead after winning the opening round – the Koppenbergcross in Oudenaarde – where he overpowered Trinity Racing's Tom Pidcock to win on the famous cobbled climb of the Koppenberg.

Recently crowned European champion Yara Kastelijn won the elite women's Koppenbergcross, and so tops the women's DVV Trofee standings from 777.be teammates Worst and Alice Maria Arzuffi, and the goal will be to keep the series lead within the team.

Meanwhile, some of the best of the US will line up at the Rockland County Supercross Cup in Suffern, New York, at the weekend, with newly crowned elite men's Pan-American cyclo-cross champion Kerry Werner (Kona) and Cannondale duo Curtis White and Stephen Hyde expected for the men's races on Saturday and Sunday, when White will be looking to repeat his double-victory of last season, having beaten Werner on both occasions.

Kona's Rebecca Fahringer and Pivot-Maxxis pair Ruby West and Courtenay McFadden are set for the women's events. West won on day one last year, while Fahringer won the second race on the Sunday, with the rivalry expected to continue this weekend.