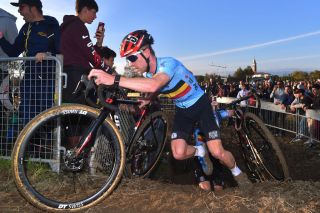 Eli Iserbyt led the charge for Belgium at the 2019 UEC Cyclo-cross European Championships but had to settle for the silver medal (Image credit: Getty Images)

The Belgian team did everything it could to try to prevent the Netherlands' Mathieu van der Poel from winning his third straight UEC Cyclo-cross European Championships title in Silvelle, Italy, but came up short by just three seconds on Sunday.

Strong early showings in the elite men's race by Belgium's Quentin Hermans and Toon Aerts appeared to be taking the fight to Van der Poel, but the 24-year-old nevertheless finished the first lap at the head of affairs. Eli Iserbyt then pushed the pace on lap two, forcing a reaction from Van der Poel, who re-took control on the third lap.

Belgium tried again through Michael Vanthourenhout on lap 4, and it began to look as though the nation's strength in numbers might pay off, with Van der Poel at one point fighting against five Belgian riders on the penultimate lap.

But when the reigning world champion pushed the pace once more on the final lap, only Iserbyt was capable of following, missing out on the title by just three seconds, while Laurens Sweeck took third place for Belgium, 20 seconds down, with Vanthourenhout another four seconds back in fourth.

Van der Poel's Dutch teammate Lars van der Haar split the Belgians' dominance of the minor placings with fifth, while Hermans and Aerts took sixth and seventh, and Great Britain's Tom Pidcock rounded out the top eight, just over a minute off the pace.

"I think Michael [Vanthourenhout] and I played it perfectly," Iserbyt told VTM Nieuws, according to hln.be. "If I'd had something left, I could perhaps have stayed with him. Van der Poel can keep up his fast pace, but he still lacks that acceleration. It's a missed opportunity, I think.

"I was struggling with the canals [water crossings], and it annoyed me that Van der Poel always got a gap there," continued Iserbyt. "Those gaps then had to be closed each time, and that's when you lose energy.

"I could see that he was also struggling near the end, but his basic condition is so good that it's really hard to beat him. If we still want to beat him, it will have to happen soon. He's going to get even better," he said.

Sweeck was similarly philosophical in defeat.

"At the start, I deliberately didn't want to take the lead," he told VTM. "I felt good during the race, and felt as though I had the legs to win it, but unfortunately I made too many mistakes during the final two laps, including falling in the canal three times.

"Why? Because I was trying too hard. It's easy to make mistakes, and you lose more time," said Sweeck.

"At one point, I was able to sit on Van der Poel's wheel for a moment, but it was obvious that he still had another gear," he said. "But I felt as though I was keeping pace well enough to try for the win. Everyone was on the limit, but the best man won."