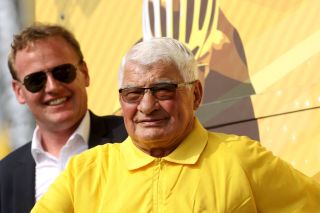 French cycling icon Raymond Poulidor passed away in the early hours of Wednesday after a two-month stay in hospital.

"He left us this morning," his wife Gisele told the AFP news agency from their home in western France.

Poulidor famously never managed to win the Tour de France but that only endeared him to the French public in the sixties and seventies. He was affectionately known as 'Poupou' and was still widely recognized and greeted with affection at the Tour de France, where he worked for yellow jersey sponsor Credit Lyonnais in the hospitality start village.

Poulidor raced against Jacques Anquetil and then a young Eddy Merckx during his 18-year career with Mercier. He was unfortunate to go up against two greats of the sport and won less than his talents deserved but it lead to the name of 'eternal second', and he made a hugely successful career from defeat, often earning as much or even more at the post-Tour de France criterium circuit.

Poulidor finished on the Tour de France podium eight times between 1962 and 1976, with his last at over 40. He was second in 1964, 1965 and 1974 but never climbed on the top step of the podium as winner and incredibly never wore the race leader's yellow jersey.

He proudly rode for France at 15 World Championships but the rainbow jersey also proved to be out of his reach, finishing second in Montréal in 1974 behind Eddy Merckx after leading out the sprint. He was third three times in 1961, 1964 and 1966.

Poulidor's best chance of winning the Tour de France arguably came in 1968. He was in a break and set to gain time on his rivals when he crashed with a race motorbike. It left him with a broken nose and head injuries, forcing him to abandon the race and any chance of victory.

"I was unlucky, but the bike gave me more than it cost me," he famously once said.  "Crashes and punctures are part of the law of sport. But we have to take into account the gains. Without the bike, my horizon would have been limited to the hedge of a field, in the Limousin."

Poulidor became the patriarch of a cycling family. His youngest daughter Corinne married Adri van der Poel and Poulidor was especially proud of grandsons Mathieu and David van der Poel, often attending races even in recent months. He affectionately hugged Mathieu on the podium of the cyclo-cross World Cup in Lignières en Berry in 2016.

Mathieu van der Poel posted a brief but emotional message on Instagram with a photo of him with his grandfather, writing: "Toujours si fier" – "He was always proud', while brother David took to Twitter to call Poulidor his "hero and biggest supporter."

Cyclingnews extends its deepest condolences to the Poulidor family.

Raymond Poulidor, one of the most loved riders in cycling history, has left us today. 😭 Merci pour tout et ALLEZ POUPOU! 💛 pic.twitter.com/abWu0R6YbONovember 13, 2019

It is with deep sadness to hear that cycling legend Raymond Poulidor has passed away. On behalf of the UCI, I extend my sincere sympathy to Raymond’s family and friends. pic.twitter.com/AAG0An5MEpNovember 13, 2019