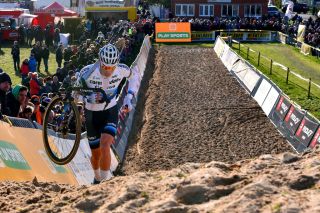 Mathieu van der Poel (Corendon-Circus) is set to belatedly begin his 2019-20 cyclo-cross campaign at the weekend, taking to the dirt at the Superprestige round in Ruddervoorde on Sunday.

The 24-year-old was originally due to start his 'cross season on October 22 at Kiremko Nacht van Woerden, but his return to the mud was pushed back after a busy season.

22-year-old Eli Iserbyt has been the dominant force so far this season, winning two out of three Superprestige events as well as all three UCI World Cup races so far.

Van der Poel, who along with injured rival Van Aert, has yet to race this season, said that he's looking forward to battling Iserbyt.

"I've followed the recent races a bit and Eli is very impressive," he told Belgian radio programme De Tribune. "He rides away at the moments he wants to and usually only has to try and get a gap once. I don't know if he's going as fast as I can; I won't know until I get back to it.

"I do think it's a shame Van Aert isn't there. For me he's always my biggest challenger. But maybe I'll find that now in Iserbyt. It looks like he's taken some serious steps, but his difference in level will only be clear after a few races."

Van der Poel, who has won the Superprestige Ruddervoorde in each of the past three seasons, cited his busy season as a reason for returning to cyclo-cross relatively late, adding that he needed rest after racing on the road and mountain-bike through the spring and summer.

"I needed some rest and I only wanted to return when I had an acceptable level of form. I had the impression that I needed some more time to build up quietly.

"It's also very difficult to correct a bad start during the season, so I wanted the basis to be good before I started."

With rest taking precedence after the end of the road season, Van der Poel hasn't spent much time on the 'cross bike in recent weeks, though he said that it shouldn't be a hindrance to his return.

"It's not so bad. I think I've ridden in the forest three times, so it's not so much," he said. "However, it's especially important to get some kilometres and hours in the legs again.

"This week I would like to work on my technique once or twice in the forest, but otherwise I will have to rest a lot to be well rested at the start. Normally, it should not be a problem. In recent years I was always a little better prepared at the start of the season, but it has been a bit of a puzzle."