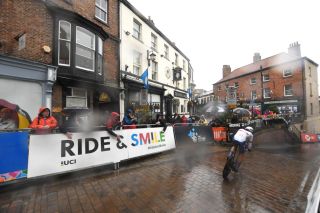 Cycling’s governing body the UCI has pushed back the elite women’s time trial at the UCI Road World Championships by 40 minutes after the U23 men’s event was affected by heavy showers and flooded roads.

Several competitors in the men’s U23 event crashed after hitting flooded sections of roads at high speed. Discussions over whether the women’s race – initially scheduled for 14:50 - would be postponed until Wednesday were held before the UCI confirmed that the event would simply be pushed back with the first rider set to race at 15:30. The start times between the riders has also been altered from 1:30 gaps to 60 seconds.

Jan Bakelants: World Championships course is on the limits of dangerous

"Due to the heavy rains experienced this morning and considering the inclement weather forecast for the rest of the day, the Union Cycliste Internationale (UCI) and the organising committee of the 2019 UCI Road World Championships have reviewed the conditions for this afternoon's Women Elite Individual Time Trial race," a press release from the governing body read.

"Following the discussions, it's been decided that the start will be delayed to 15:30 to allow water to be cleared. The organising committee and the county are deploying marshals to yellow flag areas with standing water and staff and vehicles are draining water on the roads to ensure riders' safety.

"Gaps between riders will be reduced to 1 minute instead of 1:30 so that the finish time comes close to the original schedule. The UCI and Yorkshire 2019 will continue to monitor closely the events and take any appropriate decisions."

Noura Alomairi (Kuwait) will be the first rider to start while defending champion Annemiek Van Vleuten (Netherlands) will now start at 16:22.

"I think that it's pretty dangerous. It's really technical. That's obviously very good for [the Netherlands' road race favourite] Mathieu van der Poel because he's going to love it, I'm pretty sure.

"But it's on the limit when it's wet, and it's probably going to be on the limit because we're in England. The two times that you cross the bridge, it's very dangerous. It's off-camber and that's Van der Poel's specialty."

Follow the elite women's time trial at the World Championships live on Cyclingnews.