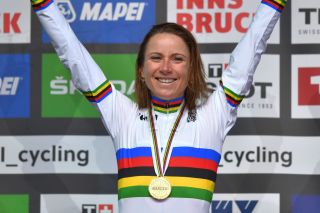 Annemiek Van Vleuten will attempt a third consecutive victory in the time trial at the 2019 UCI Road World Championships on Tuesday in Harrogate. Expected rain could make the technical sections of the course slightly more dangerous, but Van Vleuten said that she's confident in her handling skills under such conditions.

"If it's going to rain tomorrow, it might even be a little bit more technical," Van Vleuten told Cyclingnews on the eve of the race. "I think all the Dutch riders are good technically, and that's also the reason I train a lot on my time trial bike because it helps to improve skills. I know that my skills are pretty good."

The elite women will take the starting ramp in Ripon and race 30km to the finish line in Harrogate. The opening 14km is flat, but the course then undulates uphill, with a succession of three climbs, before the more technical run-in to Harrogate.

It's expected to rain through the week, and Van Vleuten said the wet conditions might affect the 150km road race if there is a large group competing on the final circuits. "I don't expect there to be a big bunch arriving on the circuits, so that will help make it a bit less technical," she predicted.

Van Vleuten said that despite the outcome of the World Championships in Yorkshire, she is happy with her season in general. She won Strade Bianche and Liège-Bastogne-Liège, along with a series of second places at Tour of Flanders, Amstel Gold Race and Flèche Wallonne. Through the summer, she won the Dutch time trial title and the Giro Rosa for the second year in a row, and the prologue at the Boels Ladies Tour.

Asked if her success in the last two seasons has seemed like a dream, Van Vleuten said, "Yes, it was always a super big dream for me to win a Spring Classic. It took me eight years to win a classic again, and I won two this year. That was already a big dream that came true.

"It's also so nice to target events. I target the Ardennes, Giro Rosa and World Championships. It's nice that it pays off and gives me confidence that I can target something and arrive in great shape."

Van Vleuten, 36, said that there are still events that she hopes to win, such as the road race World Championships, but that she is satisfied with her accomplishments to date.

"If I retired today I would be very happy and satisfied with my career," she said. "I always want to dream big and set goals, and for sure, I will continue to do that.

"To win the world title on the road and wear the jersey all year round is a big dream for me. But I can't say that I would be super disappointed if it didn't work out because I have had so many nice memories and moments in cycling."

Van Vleuten has a contract to compete under the Mitchelton-Scott banner through 2020 and said she aims to continue racing as long as she keeps improving every year.

"Last year I extended my contract until 2020," she said. "I know for myself that I will continue after 2020. This year I feel slightly better than last year, and my level has not gone down. As long as my level still goes up a little bit, I still feel hungry to improve myself. That's what drives me; to improve my skills and how fast I can be."

Cyclingnews will have full coverage of the 2019 UCI Road World Championships from September 22-29.