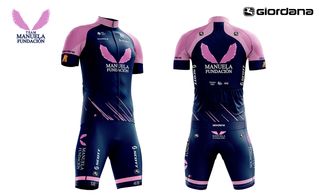 The director of sport of the non-profit organisation Manuela Fundación has said that, despite its sponsorship of Mitchelton-Scott, the current structure will remain in place this year, with both the men's and women's teams operating as usual.

"There are no plans for any changes in that area," Emilio Rodríguez, who oversees the Fundación’s sports department, told Cyclingnews on Friday morning, regarding the dramatic mid-season switch of title sponsors.

In the longer term, it remains to be seen whether the team's registration and WorldTour licence will switch from Australia to Spain. Rodríguez said, "It will be a Spanish team" and hinted at plans to move the service course to Granada.

Rodríguez also told Cyclingnews that the deal for the Fundación to take over as main sponsor was agreed in two weeks in May, with a contract signed on June 5. Full details of the takeover will be revealed on July 1 in a team press conference.

Simon Yates: My race plans are up in the air

Based in the city of Granada in southern Spain, the Fundación Manuela is a non-profit organisation owned and entirely funded by a prominent local businessman, former constructor Francisco Antonio Huertas Gónzalez, and his wife Maria Angustias Gónzalez. The Fundación currently works in the city assisting people in economic difficulties, but the plan is to expand the NGO's operations from this autumn.

"The Fundación project will really take off on October 4," Rodríguez told Cyclingnews. "We've been helping people here locally in Granada, but the big launch is something that we’ve been working towards for years.

"We've been keen followers of sport and cycling, and Francisco has always been very ambitious about moving our projects forward. So once we created the U23 team [in 2019] we always knew that we'd build on that some day.

"What's happened? We've had this opportunity, which has – unfortunately – arisen during the pandemic. But it's come up, and rather than aiming to go into the WorldTour in 2021 as we had planned, we reached an agreement with Mitchelton-Scott to go ahead with everything changed as of now.

"We really believe in cycling as a sport and we think it's a great image for our project and we know that Mitchelton-Scott's infrastructure is a very solid one."

"We had riders in MTB and Master's before this season, and the U23 squad is going well, but the idea has always been to expand the team," Calvente, who has been working with the Fundación since 2019, told Cyclingnews.

The U23 team will continue in its current format, with Calvente continuing to direct there at least this year. The U23 squad was Huertas' first venture into cycling, but "the aim is boost the Fundación’s image, and he has chosen to do that with a WorldTour team," said Calvente.

Rodriguez confirmed that the teams – both men and women's – will continue "exactly the same as before. But what'll change are the teams colours and kits."

The negotiations in themselves lasted just two weeks, with the deal signed on June 5. "And now we're working round the clock to do all the changes."

The Manuela Fundación plan mid- to long-term to switch the team's service course to Granada, retaining the base in Varese, Italy as a satellite operation, with Rodríguez saying: "It'll be a Spanish team, and we have to be proud of that."

📰 NEWS 📰"...the significance of this long-term deal is not lost on us..." - team owner Gerry Ryan.Manuela Fundación signs with GreenEDGE Cycling to secure team's future. New name and jersey to be launched with season re-start next month.MORE 🔗 https://t.co/7v1BJ5ZnyK pic.twitter.com/pKQQMs6FJFJune 12, 2020