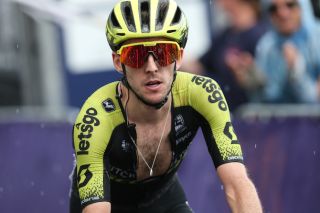 Simon Yates (Mitchelton-Scott) has still to decide his new-look race programme for the disrupted 2020 season but should racing resume and the UCI's new calendar begin in August, the former Vuelta a España winner has indicated that he is 'open to anything'.

Yates was originally set to target the Giro d’Italia in May and challenge for the maglia rosa but with the Italian Grand Tour moved to the autumn and his second goal of the Olympics pushed back to 2021, the British climber could alter his goals.

Earlier this week, Yates’ team manager Matt White told Cyclingnews that teams could load up their Tour de France squads with their best riders – an indication that both Simon Yates and his brother Adam could tackle the Tour together before moving towards the Vuelta.

At this point, that remains just one possible option, with Yates insisting that nothing has been decided.

"It’s all up in the air at the minute," he told Cyclingews and other members of the media during a Zoom video call on Thursday.

"I need to have that conversation now. One of the reasons that I was going back to the Giro was because I felt it was the best preparation for the Olympics. With the Olympics being next year, that changes things. It’s up in the air as to what I’ll end up doing. It’s yet to be discussed. I’m open to anything but I know that it’s going to be intense with so many races so close to each other."

Yates is based in Andorra, where official lockdown was partially lifted on Monday but the Mitchelton-Scott leader has not ventured outside as of yet. The lockdown measures in Andorra are still relatively strict, with the 48 pro riders based in the region split into two groups and only allowed to train every second day.

The riders have to start their training ride from a designated parking area and must stick to one stretch of road. Rides are limited to two hours, they must carry their permits and a support car must follow with a medical kit in case there is an accident.

Such measures have kept Yates inside, but he admits that indoor training and racing on Zwift has been an enjoyable alternative.

"There are still high levels of restrictions and I’m yet to go outside because I’m happy inside and training on the home trainer," Yates explained.

"I can get more done inside, which I’m fine with. The sports minister is talking to the government and some of the restrictions might be lifted next week but I’m happy indoors and cruising around on Zwift."

Riding through the final year of his contract

Yates – like his twin brother and many other riders – also has the added complication of riding through the final year of his current contract.

With all the uncertainly within cycling at present, and a wave of cuts affecting almost the entire WorldTour, the landscape is hardly ripe for contract negotiations or talks of improved terms.

For now, Yates is putting the long-term future to one side as he puts all his efforts into remaining fit and eventually racing again.

"Of course, it’s always nice to have security with a contract but everyone is going through the same thing with budget cuts and salary cuts. It’s unprecedented times that we’re living through," he said.

"I don’t know what going to happen next year with regards to contracts but I think we should all concentrate on racing first and then we can start to think about next year."