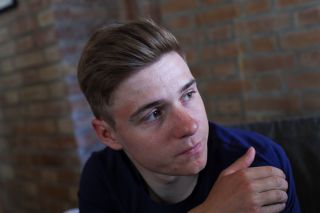 This week last year, Remco Evenepoel (Deceuninck-QuickStep) arrived in Argentina for his first bike race on unrestricted gears. Twelve months on, he returns to the Vuelta a San Juan as arguably the favourite for final overall victory. Few riders, in any, in recent memory have made such rapid development seem so routine.

Evenepoel, for his part, is matter of fact when asked if his greatest improvements had been physical or tactical during his first season as a professional, which came after he bounded directly from the junior ranks to the WorldTour.

"Both, both," Evenepoel told reporters in San Juan on Friday. "I became stronger and also the tactical part is better, the weight is better. Everything is better. Hopefully I can prove it to myself already this week. Normally everything should be better than last year."

Tales of Evenepoel's remarkable physical prowess are already legion, from murmurs about his prodigious power output during recent testing in Calpe to the 1:16 half marathon he ran as a callow 16-year-old. Indeed, on Friday, a reporter from Het Laatste Nieuws reminded Evenepoel that he was first mentioned in their pages in 2005, when he drew notice for riding for 50km at the precocious age of five.

There were some lingering question marks, however, over Evenepoel's tactical and technical acumen, given that he had eschewed the finishing school of under-23 racing in favour of a WorldTour contract. Such doubts abated during a remarkable summer of 2019 that saw Evenepoel win the Baloise Belgium Tour, the Clásica San Sebastián and the European time trial title.

"Everything. Just everything," Evenepoel said when asked the biggest lesson he had been taught during his first year at Deceuninck-QuickStep. "You cannot learn enough. Every small detail that every rider gives me, I pick it up and put it in my backpack."

If Evenepoel's 2019 campaign was, initially at least, about garnering experience, his 2020 season is focused on specific goals and broken into three distinct parts. The first part of his year sees him build towards Liège-Bastogne-Liège and the Giro d'Italia, the mid-section is devoted to the Olympic Games, while the World Championships and Il Lombardia figure in the finale.

Evenepoel's ambition, however, is not confined to those lofty targets, and he has designs on getting off the mark with an early victory in Argentina next week, where he will share leadership of Deceuninck-QuickStep with Julian Alaphilippe.

The seven-day race features five stages likely to suit their sprinters – including teammate Álvaro Hodeg – meaning that the general classification ought to be decided by the short stage 3 time trial to Punta Negra and the stage 5 summit finish on Alto Colorado.

"We will both go all-out in the time trial and in Colorado we will help each other out as much as possible. Then we will both try to go for the best position on GC possible," Evenepoel said, adding that he and the Frenchman had not yet discussed their strategy for the race.

"Not yet. We both know we are already in quite good shape. Last year, Julian was better – or he already had the leader's jersey – so I had to work for him. This year, it can be different, but we will see how it goes."

Tuesday's race against the watch will be Evenepoel's first outing the European champion's jersey and the first of a half dozen or so time trials on his programme between now and the Tokyo Olympics, though with riders competing on road bikes rather than their low-profile machines, it may be of limited value as a test in that regard.

"It's always difficult here because it's with a normal bike, so I think my strongest point, my aerodynamics, will not be as functional as on the TT bike, but I will still try to get my position as small as possible," he said. "Of course, it's a time trial and the first time in my European jersey so maybe…"

Evenepoel turns 20 on Saturday, an event that will be heralded with spreads in the weekend newspapers back home in Belgium, even if he is not himself much given to marking his birthday. "Usually, I don't really celebrate my birthday in a big way," he said and suggested that, in Argentina, his festivities will be limited to a scoop of dulce de leche ice cream.

He is well accustomed to doing his growing up in public, a process that had already begun during his teenage football career. Witness, for instance, the television crew dispatched to report from one of his first bike races in April 2017 after he had switched codes. The media attention has only heightened in the intervening period.

"I do my job and they do their job," he said. "For me, it has become normal. I don't like to say it, but I know I have become one of the biggest stars in cycling. I don't want to be like that, but it is how it is."

Having achieved such success in his debut year – five wins and a World Championships silver medal – Evenepoel has set a high bar for himself ahead of his sophomore season, even if the burden of expectation is something he claims to wear lightly.

As for the notion that some of his peers, envious of his success and his renown, might start actively riding expressly to prevent him from winning – a phenomenon encountered, for instance, by his compatriot Eric Vanderaerden in his early seasons as a professional in the 1980s – Evenepoel simply smiled. "If they want to be jealous, they can be," he said. "I will not be awake in the night about this."