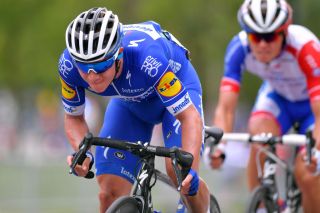 In 2019, Remco Evenepoel became the European time trial champion – a remarkable feat in what was the 19-year-old Belgian's first season as a professional, having joined WorldTour team Deceuninck-QuickStep straight from the junior rankings, leapfrogging the under-23 category entirely.

Even more remarkably, it came after a stage win and the overall title at the Baloise Belgium Tour, a stage at the Adriatica Ionica Race, and a surprising, yet totally dominant, solo victory at the Clasica San Sebastian one-day WorldTour race in Spain.

The European title also guaranteed Evenepoel a place in the Belgian team for the 2020 Olympic Games in Tokyo, Japan, this summer, where he'll represent his nation in both the individual time trial and the road race – a huge honour, and not one to be taken lightly, as he explained in an extensive interview published this week by his national federation, Belgian Cycling.

Evenepoel used to play youth football for Belgian clubs Anderlecht and PSV Eindhoven, representing his nation at both under-15 and under-16 level before finally choosing to focus on cycling, but would a 15-year-old Evenepoel have set his sights on getting to the Olympic Games or the (football) World Cup, he was asked.

"If you're a football player, getting to the World Cup is the highest goal you can achieve," he said. "So the boy I was four years ago wouldn't have hesitated to answer that question: the football World Cup, no doubt – even though fate would decide that I'd look at things differently over time."

Now, Evenepoel is happy to admit, going to the Olympics takes precedence over everything, and when given the cycling-specific option of whether he'd rather win Olympic gold or a World Championships, the teenager was again unequivocal.

"To become Olympic champion – without a doubt," Evenepoel said. "The Olympic Games transcend the traditional sports atmosphere; you are part of something larger, and no longer in that cocoon of cycling.

"And if I could win there, that recognition would also be different, I suspect. Of course, as a world champion, you also get a lot of respect and appreciation, but I think that an Olympic title would be different again – both for you and by how the public sees you. So, if I'm honest, winning Olympic gold would give me the most satisfaction," he said.

"Within cycling, winning at the Worlds is the highest attainable goal of a season," he continued. "On the other hand, you only get to experience the Olympic Games once every four years – a unique opportunity that you may only get to experience once in your career, so I can understand why people rate an Olympic medal so highly."

The tough, hilly courses for both the time trial and the road race in Tokyo in July are why Evenepoel has been "fully focused" during his training this winter.

"And then adapting to the climate will also be very important," he added. "In that respect, we've already explored a few options. My training will be different – more specific – and I'll drop certain races. But this has all been done in consultation with the [Deceuninck-QuickStep] team. We've drawn up the dream plan, and my preparation will be perfect – at least, I hope it will."

As to whether he'll focus more on the time trial or the road race in Tokyo, Evenepoel said that it would be a case of taking things "day by day" in Japan, with the road race taking place on July 25 and the TT following four days later on July 29.

"If I do well in the road race, fantastic. If I don’t do so well, well, that's just unfortunate," he admitted. "But in either scenario, my focus will then switch to the time trial. You can't concentrate on two things at the same time over there. If you neglect any little details, it can be the difference between winning and losing."

Evenepoel also named two one-day Classics – two of cycling's five Monuments, no less – as events where he'd like to shine, either this year or in the near future: Liège-Bastogne-Liège and Il Lombardia.

After his convincing win at San Sebastian last season, and his committed efforts to performing at the Olympics, few would argue with the notion that Evenepoel has the ability to eventually achieve whichever goals he puts his mind to.