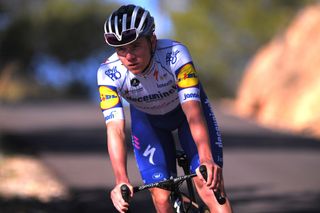 Remco Evenepoel has clarified his main goals for the 2020 season, which will see him split the year into three distinct segments and major race goals.

The 19-year-old is set to make his Grand Tour debut at the Giro d'Italia, and will be among the favourites to take the pink jersey in Budapest. Evenepoel, speaking at Deceuninck-QuickStep's Spain training camp, told Cyclingnews that it's a possibility, though wouldn't be fully drawn on his chances at taking the maglia rosa.

It's unusual for a rider to take part in a three-week Grand Tour, the toughest endurance challenge in the sport, so early in his career and at such a young age. For Evenepoel, his continued participation all the way through to the final time trial in Milan is not yet set in stone.

Instead, it'll be a case of monitoring Evenepoel's progress through the race and going from there.

"We're going to see in the end. The main goal is to get experience because hopefully it won't be my last Grand Tour," Evenepoel said. "So I'll get experience, taste the Grand Tour atmosphere and then see how my body will react. If after ten days my body is empty then I'll drop out, and if I'm good until the last day I'll continue."

The Giro will form the main part of Evenepoel's first goal 'segment' of 2020, along with the Ardennes Classics. In April he'll head to La Flèche Wallonne and Liège-Bastogne-Liège, competing in both races for the first time.

After a break in the summer, Evenepoel will then target the Tokyo Olympics, and he says that it's possible to challenge in both the road race and time trial.

Both races are climber-oriented, with the 234km road race featuring 4,865m of ascent, while the Fuji Speedway-based 44.2km time trial course will see riders tackle six hills and 846m of climbing.

"I think yes," Evenepoel said about being able to target both races. "I've always said that the Olympics are one of the main goals this season and I really mean both races because the time trial and the road race are really hilly and climbing a lot. Both are really main goals and I'll try to get the maximum out of both races."

Evenepoel's final goals of 2020 will be the World Championships, another climber's course in Switzerland, and Il Lombardia. A season spent targeting the biggest races in the world is unheard of for a teenager, but after a debut season which saw him take the European time trial title, a solo win at Clásica San Sebastián, and silver in the Worlds time trial, the progression is a natural one.

"I think it should be possible [to have a better year]," Evenepoel said. "I had five victories last season, three at a pretty high level and then some smaller races.

"You can have bigger seasons if you see the amount of races you win, or category of races you win. I'm a winner and I always want to do better, so hopefully the next season will be better than last season."