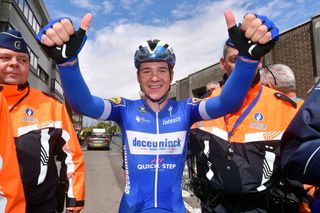 Remco Evenepoel has a habit of using numbers to illustrate his point, like when he recalled his winning attack on the Alto de Murgil at last year’s Clásica San Sebastian. “I think I was never under 450 watts,” Evenepoel said. Or when he described how he became European time trial champion five days later. “I pushed 400 watts average in the time trial,” he said. “For my weight, 61kg, that’s a lot.”

The 19-year-old garlanded his first season as a professional with five victories, but the extent of his impact on the sport is perhaps better represented by another number. When Deceuninck-QuickStep held its team presentation in Calpe on Friday, there were 73 accredited media on hand, an increase of roughly 30% on the turn-out twelve months ago.

The plurality of that number flew south from Evenepoel’s home country, even if one reporter confessed that, in an age of social media and instant information, the Belgian press already knew just about everything it could know about a youngster who has been doing his growing up in public for most of his teens, first on the football field and now in the peloton.

Evenepoel rode his first bike races as a junior in April 2017, and even then, his celebrity meant that a local television station was moved to dispatch a camera crew to file a report on his abrupt change of disciplines. He had already gained press attention the previous autumn, when, aged 16 and dressed in Anderlecht kit, he had run the Brussels Half Marathon in 1:16.

This winter, meanwhile, the worst-kept secret in Belgian cycling concerned Evenepoel’s imminent Grand Tour debut at the 2020 Giro d’Italia. He formally confirmed the news in an interview with La Gazzetta dello Sport published on Friday morning, divesting any lingering suspense from that afternoon’s team presentation, but he was still the man who faced the most questions from reporters afterwards.

Evenepoel spent around two hours on the 29th floor balcony of the Hotel Sol y Mar as television crews lined up for their grabs with the man of the moment. After the sun had dipped beyond the horizon, he came inside and sat with the written press, first facing a barrage of questions in Dutch and French from the Belgian media, before doing it all over again in English for the international press.

In three languages, he spoke with the easy confidence and amiability of a man who has been doing this for decades, but he is still two weeks shy of his 20th birthday. The burden of stardom is a heavy one for a teenager to carry, and though he shows no signs of strain, Evenepoel confessed that his life has changed immeasurably over the past twelve months.

“Everything became harder to control. Almost everybody knows how my life is going,” Evenepoel said. “Sometimes it’s difficult to be me, but it’s also good, because you know that if the people are talking about you, it’s because you did something well and you have good results on the bike, stuff like this. It’s not bad to be me but sometimes it’s hard. But that’s life, and I always try to do it with a smile.”

Indeed, Evenepoel could joke with a reporter who wondered if he had been lying this time last year when he said that he didn’t expect to win a race in his maiden season as a professional. “I would never lie. My mom told me never lie. A year ago, I was an 18-year-old guy and I didn’t know what would happen,” Evenepoel grinned and then issued an apology sotto voce: “I’m sorry for the lie.”

It already seems inevitable that Evenepoel will add to his running tally of wins in 2020 and he had little interest in downplaying his ambition as he outlined his principal targets of the campaign. “I’ll have, let’s say, three peak moments,” he said. “The first one will be Liège and the Giro, then after we have the Olympics, and then the Worlds and Il Lombardia.

“I know I will not be able to win all of them, and maybe I won’t even win one of them. I just have goals and I want to be in the best shape possible in those moments, then we will see what it will bring. I’m really motivated for the season. I don’t know why, but my winter was really good, and I feel ready to start the season.”

The helmet strap tan line on Evenepoel’s face is evidence of his off-season work. Although he ultimately decided against moving to Monaco or Andorra, at least for the time being, Evenepoel spent large chunks of the winter away from his native Belgium and based in this very hotel  as he trained on the Costa Blanca. As in 2019, he will start his season at the Vuelta a San Juan in Argentina, and he will hope to open his account for the year in South America. “I think I’m already stronger than at this point last year, so if I have a chance in Argentina, I’ll go for it,” he said.

The Volta ao Algarve, Tirreno-Adriatico and the Ardennes Classics follow, but it was Evenepoel’s precocious Grand Tour debut that elicited the most interest on Friday afternoon. The Budapest prologue offers him an early chance to take the maglia rosa and perhaps imitate his fellow countryman Eric Vanderaerden’s remarkable 1983 Tour de France debut. La Gazzetta dello Sport, meanwhile, has pointed out that, come the final day in Milan, Evenepoel would be four months younger than Fausto Coppi when he became the Giro’s youngest ever winner in 1940.

Evenepoel, for his part, has already stressed that he will ride the Giro “to learn and improve” and noted that he the only stage he is likely to reconnoitre beforehand is the time trial to Valdobbiadene.  The corsa rosa appeals in part because it fits squarely with his build-up to the Tokyo 2020 Olympics, where he will look to improve on the silver medal he won in the time trial at the Worlds and where he will race with purpose, too, in the preceding road race.

“The Tour de France was too close before the Olympics and the Vuelta was too soon afterwards, I would have been empty. Only the Giro fitted,” Evenepoel said. “But it was the team who decided to put me in there, not me. They think I’m ready to make my Grand Tour debut and that’s good for me, because it gives me a lot of motivation. They proposed it to me, and I said, yes, I’ll do it.”

Deceuninck-QuickStep had to fend off interest from Team Sky (now Ineos) to sign Evenepoel in 2018 and he quickly agreed a contract extension that will keep him at the squad until the end of 2023. A striking feature of Evenepoel’s debut season with Patrick Lefevere’s outfit was the harmonious nature of his rapport with some of the senior members of the squad. Iljo Keisse and Philippe Gilbert, in particular, weighed in with advice across the year. On Friday, Keisse was already in Australia ahead of the Tour Down Under, but he checked in as soon as he had woken up in the southern hemisphere.

“I saw just now he’s sent a message saying, ‘How was the media day?’ He’s a bit like my second father,” Evenepoel said. “Phil is on another team [Lotto Soudal – ed.] now so he probably won’t help me too much anymore, but still we have contact on Whatsapp and phone, and I think that will never be lost.”

Another grandee, Yves Lampert, played a role in Evenepoel’s development in June of last year when the youngster was dutifully learning the ropes but not riding with the same confidence he had displayed in his opening races. One night at the Tour of Norway, Lampaert quietly encouraged him to start racing with the same uncalculated aggression he had displayed as a junior. The next day, Evenepoel spent 60km off the front before being caught in the finale. It was a turning point.

Later that month, he won the Tour of Belgium, and as the summer progressed, his season caught flame, though he insists it was all tougher than it looked. “If you think winning San Sebastian was easy then you are wrong. No, everything is hard in cycling,” he said.

Fresh from that San Sebastian triumph, Evenepoel indulged in a 100km solo break on the Deutschland Tour, partly for the thrill of it and partly because, well, he could. He accepts that he won’t have the same leeway to make such attacks in 2020, and yet it is hard to imagine him tempering that dynamic approach anytime soon.

“I don’t think that’s going to be my racing style anymore,” he said. “But then if you want to win, you have to attack, so I’m not going to stop attacking.”