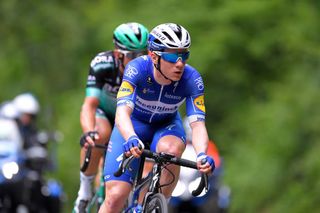 Remco Evenepoel in action during his debut season in the WorldTour (Image credit: Getty Images)

Remco Evenepoel, 19, has won the Belgian sportsman of the year award at an event held on Saturday evening. The Deceuninck-QuickStep rider is the first cyclist since Greg Van Avermaet (2016) to win the award.

Evenepoel only moved into the WorldTour ranks at the start of the 2019 season but became an almost instant success after dominating the junior ranks the previous season.

In 2019 he won the Tour of Belgium in June before finishing third in the national time trial championships. A stage win in the Ionica Race followed in July before stunning back-to-back wins in San Sebastian and the European Continental Championships time trial.

The young rider closed out his season by taking second in the elite men’s time trial at the World Championships in September behind Rohan Dennis.  In the road race at the same event, Evenepoel put in a highly respectable performance by helping teammate Philippe Gilbert after the veteran crashed.

"We always say that everything good happens quickly, so I think it's good," RTL report Evenepoel as saying after he picked up his award.

"It's incredible. I have no words for it and it doesn't happen to me very often. Last year I was ‘a Hope’ and now I'm the ‘sportsman’ of the year. Such an award just motivates me more for the future. It doesn't make me nervous, I want to go even stronger. It will always be so in the future. I also get a lot of help from my family and girlfriend and of course my fantastic team.

Evenepoel has already set his stall out for 2020 and will target several high profile one-day races, as well as the Tokyo Olympic Games.

“For next year, I have four main goals: Liège-Bastogne-Liège, the Olympic time trial in Tokyo, the race at Worlds and the Tour of Lombardy ".

"Succeeding the greatest Belgian athletes means a lot to me. I try to focus on what I have to do."