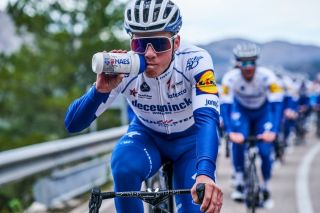 Remco Evenepoel has confirmed he will ride the Giro d'Italia in 2020, with the Deceuninck-QuickStep leader to use his Grand Tour debut as a test of his stage racing ability and to lay the foundations to his form in view of the Tokyo Olympic Games.

Evenepoel had hinted he would ride the Giro d'Italia when he was feted as Belgium's sportsperson of the year in late December. "My programme has been fixed since training camp, but I can’t say anything before the presentation on January 10," he said.

He stated that he had four objectives in 2020 – Liège-Bastogne-Liège, the Olympic Games, the World Championships and Il Lombardia – but noted that "there will also be surprises - a present, even."

Evenepoel confirmed he would ride the Giro d'Italia in an exclusive interview with La Gazzetta dello Sport, the Italian sports newspaper that owns the Corsa Rosa. More details of his and the Belgian team's 2020 goals will be revealed later on Friday at the team presentation in Calpe, Spain.

Only turning 20 on January 25, Evenepoel will be one of the youngest riders to make their Grand Tour debut. Fausto Coppi is the youngest ever winner of the Giro d'Italia, taking the maglia rosa aged 20 years, eight months and 25 days.

"It's an honour, a huge honour," Evenepoel told La Gazzetta dello Sport. "It's the first Grand Tour of what I hope will be a long career. I can’t wait."

Evenepoel first raced in Italy in 2018 when he won the prestigious Giro di Lunigiana stage race. He took a stage of the Adriatica Ionica Race in July and said that he loves the passion of the Italian tifosi.

"Italy is crazy about cycling, just like Belgium. The races are full of energy and are spectacular. The Giro is perhaps the only Grand Tour where you can't predict what will happen and I like that, it's exciting," Evenepoel said.

"We started to talk about my 2020 season last August when I secured a place (in the Belgium team) for the Olympic Games in Tokyo, where I'm targeting the time trial. The Giro d'Italia will be an important part of my road to the Olympics. It's fits in perfectly and is also prestigious in its own right."

After winning the 2019 European time trial title and finishing second to Rohan Dennis in the World Championships, Evenepoel is a natural contender for the opening time trial in Budapest. He may not finish the Giro d'Italia, as he tests his Grand Tour ability, but will be one of the big names, alongside Peter Sagan, Vincenzo Nibali, Simon Yates, Romain Bardet, Jakob Fuglsang and 20129 winner Richard Carapaz.

"I'll be able to test my limits, the longest race I've ever done is just nine days," he explained. "There's no stress or particular ambitions, the idea is to gain some experience.  I could ride two or three weeks or just 10 days, I don’t want to empty my tank. But I will give my very best in every moment.

"The opening time trial could be good for me but I usually go better in longer time trials. But anything can happen, on a good day you can beat everyone or finish last. We'll see. I'll ride the Giro d'Italia to learn and to improve."

Evenepoel has always shrugged off any comparisons to Eddy Merckx but he is ambitious. He is the youngest of a new generation of stage race riders that includes Egan Bernal, Tadej Pogačar, Pavel Sivakov and David Gaudu.

"I don't like to be compared to Merckx because we're talking about different era, it doesn’t make sense," Evenepoel said.

"I'd like to be the best of my generation. I know it'll be hard. It'd mean I win a lot and win well, that's a huge challenge but I want to try. Maybe we can look back and discuss if I've done it in 15 years time."

"I'm working to be a Grand Tour rider. The long climbs are a bit like time trials: lots of time at high power, with accelerations. The numbers say I can be suited to Grand Tours but I've got to prove it. But if I get dropped, I'll just work harder and even if I don’t get dropped, I know I'm going to have to do a lot of hard work."

Cyclingnews will have full coverage of the Giro d'Italia, will live coverage of all the stages, reports, photo galleries and exclusive news and interviews.

Barry Ryan will have further news and interviews from the Deceuninck-QuickStep team presentation in Calpe, Spain.