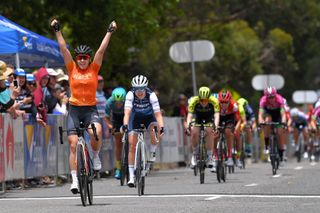 Rally Cycling may need to rely heavily on their Canadian riders to support Chloe Hosking at the La Course by Le Tour de France, set to take place on August 29 in Nice. The US-based Continental outfit were invited to compete in the one-day Women’s WorldTour race but travel restrictions surrounding COVID-19 coronavirus could stop American riders from entering France.

"The current restrictions on US travelers to Europe means that we may need to consider a team for La Course consisting of our Canadian riders and 2016 [La Course] champ Chloe Hosking," Rally Cycling’s Chief Operating Officer, Jake Erker told Cyclingnews.

The UCI announced the revised-late season calendar in May and, while several events have already been cancelled, the Women's WorldTour has retained 15 of its original 22 events. It will include four stage races and 11 one-day races held from August 1 to November 8.

In that calendar announcement, it was revealed that ASO had moved La Course from its original circuit race along the Champs-Élysées in Paris on July 19 and rescheduled it alongside the opening stage of the Tour de France. ASO later published a map of the new route on its website and the women will race a 96km road race that includes two climbs over the category 3 Cote de Rimiez.

ASO also announced the 23 teams invited to compete in the one-day race and Rally Cycling secured one of those spots. The squad confirmed that they would race in support of Australia’s Chloe Hosking, who won the 2016 edition of the race. However, which teammates will be available to support her remains uncertain due to COVID-19 travel restrictions.

The European Union (EU) confirmed in late June that American citizens and residents would not be allowed to enter its borders when the pandemic restrictions eased on July 1 because of the nation's inability to contain the spread of COVID-19 coronavirus.

"We would love to field more Americans and arrive in Nice, and to future events, with a full team. Ultimately, outside of a professional athlete exemption, that will be up to the European Union to decide when they can enter," Erker said.

Rally Cycling has a long history of supporting Canadian athletes and riders currently under contract include Sara Bergen, Allison Beveridge and Sara Poidevin. To support Hosking in her attempt to win La Course, Rally Cycling might only be able to field four riders.

According to the UCI rules, teams can field a maximum of six riders at a one-day Women’s WorldTour event and a minimum of four to be able to start the race. However, Rally Cycling confirmed that they have requested more information from the UCI regarding the minimum number of riders required due to the circumstances.

"Rally Cycling remains committed to the safety and well being of our athletes and staff," Erker said. "We will abide by the regulations in front of us and the concerns of our riders and staff as we plan a return to racing."