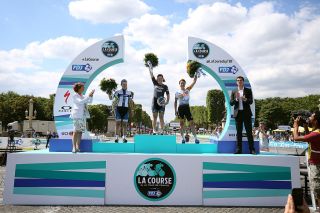 La Course by Le Tour de France have revealed the brand new route for the one-day Women's WorldTour event set to take place in Nice on August 29. The event was moved from its original circuit race along the Champs-Élysées in Paris on July 19 and rescheduled along with the Tour de France after the COVID-19 pandemic caused a mass calendar reshuffle.

Organisers of the event, ASO, have instead designed a 96km road race that includes two climbs over the Cote de Rimiez in what is expected to be a bunch sprint in Nice. ASO published a route map and time schedule on the event website. The race will be held in conjunction with the opening stage of the Tour de France.

"The course looks really fast which is to my liking," said 2016 La Course by Le Tour de France winner Chloe Hosking of the new route in a Rally Cycling press release. The American squad has received one of the 23 team invitations to the event.

Rally Cycling noted in it's press release that the route is well-suited to their team captain Hosking. "I’m really excited to join my teammates and show the world what we got!" she said.

The new route will begin along the Mediterranean coast in Nice and head north toward the category 3 Cote de Rimiez, located just 8km into the race. The women's field will race further north toward Castagniers before looping back south to complete a 50km circuit. The field will pass through the start-finish line in Nice before completing another large loop and a second climb over Cote de Rimiez at the 56.5km mark. The women will then race back toward Nice for what is expected to be a sprint finish Promenade des Anglais in Nice.

Hosking said in a recent press release that her 2016 La Course victory remains one of the highlights of her career. "Winning along the Champs-Élysées was an incredible feeling. "It’s the pinnacle of our sport and I can’t wait to give it another go."

The Women's WorldTour kicked off in Australia in February at the Cadel Evan Great Ocean Road Race won by Liane Lippert (Sunweb), before it came to a halt due to the COVID-19 coronavirus pandemic.

The UCI announced the revised-late season calendar in May and the Women's WorldTour, and while several events have already cancelled, it has retained 15 of the original 22 events. It will include four stage races and 11 one-day races including a first-ever women's Paris-Roubaix.

ASO had no other the details of the one-day women's La Course by Le Tour de France at that time, however, UCI President David Lappartient said that moving the event to Nice was discussed with ASO, as part of the revised calendar meetings, because of the potential challenges of hosting a race in Paris.

La Course by Le Tour de France was established by ASO in 2014 as a circuit race on the Champs-Élysées on the final day of the Tour de France. The sprinter-friendly format saw victories for Marianne Vos, Anna van der Breggen and Hosking in the first three editions. Organisers shifted to a two-day experiment in 2017 won by Annemiek van Vleuten. The current world champion also won the one-day 2018 edition in Le Grand-Bornand. Vos won her second La Course title on a one-day circuit race in Pau last year.

Full list of teams at La Course by Le Tour 2020