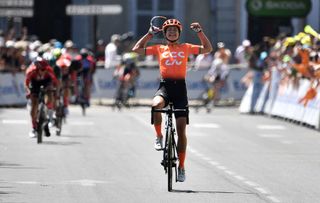 ASO has announced the teams to take part in the 2020 edition of La Course by Le Tour de France. 2019 winner Marianne Vos' CCC-Liv team are among the automatic selections for the race, which is set to run on August 29.

Other teams to race the seventh edition of the one-day race include Boels Dolmans, Lotto Soudal and Paule Ka, the newly rebranded Bigla-Katusha team.

The race was originally set to be held on July 19 in Paris, though the original date was cancelled due to the COVID-19 pandemic. With the new date coinciding with the opening stage of the men's Tour de France in Nice, it's likely that La Course will be held in the southern city, though that has yet to be confirmed by ASO.

Founded in 2014, La Course has been dominated by Dutch riders since its inception, with Chloe Hosking's win in 2016 the only edition won by a non-Dutchwoman. Vos took victory in 2014 and 2019, Anna van der Breggen triumphed in 2015, and Annemiek van Vleuten won the two-stage event in 2017 and in 2018.

After 2017 and the unofficial second 'pursuit' time trial stage, the race reverted to a one-day format, with the thrilling 2018 edition seeing Van Vleuten hunt down Van der Breggen during the final 14km of the race, catching and passing her compatriot in the final metres of the 112km race.

An expansion of the race into a full women's Tour de France looks possible in the future, with Tour race director Christian Prudhomme commenting in May that it would be "logical to envision" a race for 2022. The comments came shortly after the 2020 Women's WorldTour was expanded with the surprise addition of a women's Paris-Roubaix, which will be held on October 25.

Full list of teams at La Course by Le Tour 2020