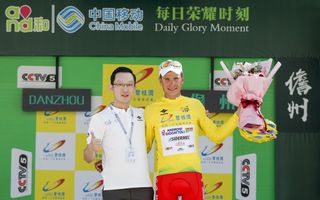 The 2020 edition of the Tour of Hainan has been postponed due to the outbreak of coronavirus.

The week-long Chinese race was due to be held from February 23 to March 1, having moved from an autumn date in the calendar to join the new UCI Pro Series.

However, on Monday, race organisers announced the race would not take place, and they're now looking at whether it can be held later in the year.

"In order to avoid the risk of the spread of new coronavirus by holding the Tour of Hainan road race, and to protect the health and lives of athletes, referees, staff, as well as riders and spectators, the organizing committee has decided to postpone the race," read the statement.

The new strand of coronavirus, which can cause pneumonia and organ failure, has so far killed 80 people, with 400 in critical condition and a further 2,500 known to be infected.

The outbreak is thought to have originated in the Chinese province of Wuhan, 1500km north of Hainan.

"Depending on the development of the epidemic, the organizing committee will release the specific time through official channels," the statement added, in relation to a possible new date for the race.

On Monday afternoon, the UCI issued a statement confirming the postponement, which read: "The UCI has noted the cancellation of the event on theses dates and approved the request of the Chinese National Federation to postpone it to a later date in 2020 subject to availabilities on the calendar.

"The UCI is in regular contact with the Chinese authorities, which are keeping it informed of the evolution of the health situation and its impact on the organisation of cycling events in the country. It will take decisions necessary to ensure the safety of all stakeholders."

The next road race scheduled in China is the Tour of Chongming Island, a Women’s WorldTour event, in early May.

The postponement of the Tour of Hainan follows the cancellation of the 2020 Tour of Oman, due to the period of mourning following the death of Sultan Qaboos.