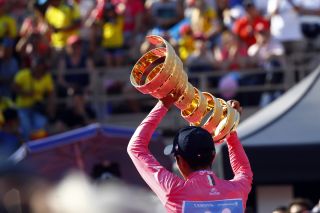 UCI president David Lappartient has said that the postponed Monuments and a shortened Giro d'Italia could now be held in the Autumn as part of plans to extend and redesign the professional cycling season due to the impact of the coronavirus pandemic on spring racing.

After a teleconference with the associations representing the race organisers (AIOCC), teams (AIGCP) and riders (CPA), the UCI has confirmed its intentions to extend the season and to find dates for the postponed Monuments and Giro.

The UCI confirmed that no events will be held before the end of April, sparking the official cancellation of the Amstel Gold Race, and added that if and when competition does resume this year, priority will be given "to events on the calendar at the date of the resumption."

However, the governing body has also pledged to find room on the calendar for Giro d'Italia, Milan-San Remo, Paris-Roubaix, plus the men's and women's Tour of Flanders and Liège-Bastogne-Liège, and has not ruled out the prospect of overlapping those races with existing events on the calendar.

"With regards to the men's calendar, depending on the space available and taking into consideration the possibility of overlapping, to the three Grands Tours and cycling’s Monuments," read the statement. "The principle of flexibility could also be envisaged when it comes to the number of cyclists entered by teams at events."

The UCI added that the men's and women's seasons will be extended to November 1, and the resolutions have been submitted to the UCI Management Committee and Professional Cycling Council for Approval.

"We're working with the organiser RCS to find a place for the Giro, undoubtedly in Autumn," Lappartient said in an interview with France TV Sport.

"The possible avenues are a localised Giro, obviously redesigned too, and perhaps not of the same length. But the Giro, together with the postponed Classics, obviously forms part of our priorities, and we have high hopes of seeing it raced. As for the Tour de France, for now, nothing has changed."

Some Italian teams have called for other races to be held during the Tour de France. Others have optimistically suggested the Giro d'Italia could be held in early June.

The 2020 Giro was due to start in Budapest on May 9 but the postponement of the race was announced last week after Hungary entered a state of emergency due to the Covid-19 pandemic. Italy, the worst-affected country in Europe, remains in lockdown until at least April 3.

As things stand, the final Monument of the season, Il Lombardia, is fixed for October 10, while the last WorldTour race, the Tour of Guangxi in China, scheduled for October 15-20.

As well as extending the season to the end of October, the UCI is prepared to rearrange races already scheduled for Autumn in order to find room for the Monuments and Giro. This would mirror the situation in tennis, where the French Open has been moved to September as the sport looks to maintain its marquee events, the Grand Slams.

"In the days and weeks that come, we’re going to work on remodelling the calendar, depending on the evolution of the epidemic, of course," Lappartient said.

"The first possibility is to refix the Monuments of cycling for the Autumn. For that we have the possibility to pushing the end of the season out by two weeks, to October 31. We’ll also study how to shift certain race dates in order to make space for everybody."

Lappartient acknowledged that those plans would come to nothing if the Tokyo 2020 Olympics – currently fixed for July 24 to August 9 – were postponed until the Autumn. "But I don’t believe that will happen," he said.

The obvious difficulty in finding space for the postponed races was already articulated by Circus-Groupe Gobert manager Jean-François Bourlart, who pointed out that the calendar later in the year is already crammed with races.

"From the month of March until the mid-October, there are races every day," he told RTBF on Tuesday.

The situation will be complicated still further if the ongoing spate of postponements extends beyond the end of May. For the time being, races like the Critérium du Dauphiné, Tour de Suisse and Tour de France remain in their planned places on the calendar, but in a time of pandemic, it remains unclear when cycling will resume this year.

"It's certain, that's for sure," Lappartient said. "The decision to organise a stage race like this or not must be taken three weeks in advance, the time necessary to get the (road) security conditions in place.

"One of the questions, for example, is whether the organisation will be able to arrange the policing necessary to guarantee the security of the route, as these are resources that are obviously mobilised elsewhere at the moment.

"In addition, a decision must be taken and authorisation received from the police three weeks in advance. That would mean a decision in early May for this race [the Dauphiné] which is starting on May 30."