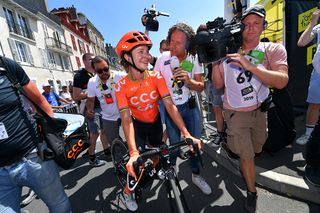 Just 100 metres from the finish line on the Promenade des Anglais, it looked like Marianne Vos (CCC-Liv) would win the 2020 La Course by Le Tour de France for a record third victory in the seventh edition of the one-day race attached to the men’s Tour. But on the final metres, Vos was passed by Lizzie Deignan (Trek-Segafredo) who took the win thanks to the support of her teammate Elisa Longo Borghini.

After the race, Vos was understandably disappointed with her second-place finish.

“The finish line was just too far, I started sprinting too early,” Vos said to Dutch TV station NOS. “I responded to Elisa Longo Borghini and I really should have waited just a bit longer. It is a shame, a waste of such an opportunity, because it was a really good race. But that’s cycling. I had suffered quite a bit during the race, and when you come to the finish with Lizzie, you cannot afford to make such a mistake.”

CCC-Liv sports director Jeroen Blijlevens commented that the race went according to plan as the team expected the Côte de Rimiez climb, cresting 40 km from the finish, to be decisive.

Annemiek van Vleuten: We were a little bit unlucky at La Course

“We knew that we had to be attentive on that climb. Marianne Vos was at the front when the pace went up. Soraya Paladin also was there at first, but it went a bit too fast for her. Pauliena Rooijakkers just about missed the group,” Blijlevens recounted.

“It was my plan to attack at the bottom of the climb,” Van Vleuten said. “I did not look back, just did 15 kilometres all by myself and hoped that everyone was suffering as much as I was. We were unlucky with two Trek riders there, because if you have only one rider per team it is easier to attack.”

Not a strong sprinter herself, Van Vleuten knew she would have to work hard to get a result. “When I saw the course, I knew it was not really my race, but you never know. Everyone said it would be a sprinters’ race, so I am proud of what I did, helping to make the race spectacular,” she said.

In the flat final, the six frontrunners worked together to keep their advantage on the chasing peloton, and on the final kilometres, those riders with a weaker sprint tried to get away.

As the strongest sprinter in the group, the responsibility to reel in those attacks fell to Vos, and she did jump on the wheels of Longo Borghini, Van Vleuten, and Niewiadoma four times in the last 2,500 metres.

When Longo Borghini then opened up the sprint, Vos was on her wheel again. But these repeated efforts with next to no recovery time in between had left their mark on Vos, and when she slowed down with the finish line in sight Deignan came out of her slipstream and threw her bike over the line to win.