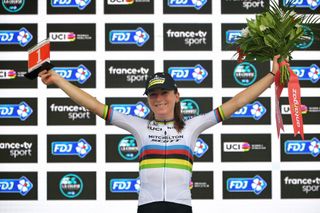 Annemiek van Vleuten (Mitchelton-Scott) forced the winning breakaway at the 2020 La Course by Le Tour de France in textbook fashion over the route's only climb, Côte de Rimiez, but the road race world champion said that her efforts to win the one-day race were thwarted by Trek-Segafredo's strength in numbers.

"I knew when I saw the parcours of La Course that it wasn’t really my race, but that there were opportunities because you never know," Van Vleuten said after the race.

"We were a little bit unlucky because there were two Trek riders [in the breakaway]. If there was only one Trek rider, it would have been easier to attack, but today they put one on the attacks and [saved] one for the sprint, so that was a bit sad."

Trek-Segafredo's Lizzie Diegnan won the race from a six-rider breakaway sprint to the finish line on Nice’s Promenade des Anglais. She beat Marianne Vos (CCC-Liv) and Demi Vollering (Parkhotel Valkenburg). Deignan's teammate Elisa Longo Borghini was also in the move and set up Deignan perfectly for the win by either attacking herself during the last lap or covering rival attacks on the way to the finish. Kasia Niewiadoma (Canyon-SRAM) was also in the breakaway and finished fourth.

Van Vleuten finished fifth in the six-way sprint but earned the event's combativity award for her aggressive racing strategy during the 96km road race. Van Vleuten initiated the winning move after attacking at the bottom of the Côte de Rimiez with 44km to go, and only five riders could follow.

She went on to tow the breakaway for 13km in order to establish the gap before her companions joined in the rotation. She later said she didn't expect to get help from her rivals in the move.

"It was not frustrating," Van Vleuten said. "I just accepted the scenario and I didn’t look back. I just raced 13km all by myself and I didn’t ask anyone for help because I knew they would not do that. I just continued and was hoping everyone was suffering as much as I was, because I suffering."

Van Vleuten, who won the race in 2017 and 2018, went into this edition as one of the favourites after winning the majority of races she has started this year. She opened the season with a victory at Omloop Het Nieuwsblad in March, then the three one-day races in Spain in July, followed by Strade Bianche at the beginning of August, and then the European Championships on Thursday.

She was critical of the La Course by Le Tour de France route, a 96km two-lap circuit, that included the Côte de Rimiez, as being not challenging enough for the Women's WorldTour.

However, following the race she said that while she hoped for a more challenging course, she was proud to have added to its difficulty by attacking and making the race hard.

"It’s true everyone said it would be a sprinter race. I’m proud about what I did and at least to help make a spectacular race," she said.

"It was the plan to attack at the bottom of the climb and when we did it on the first lap, I knew it would be hard to make the difference there because it was only four or five per cent. There was not a moment where it was a little bit steeper, and that didn’t help.

"I was sad we didn’t do the loop the other way around because, on paper, I saw 23km after the descent that was flat and straight, and it was not enough ingredients to make a really beautiful race. It should be longer to make the field tired, to go on the climbs and make it a bit more racing."

In the end, Van Vleuten said she was still pleased to earn both the combativity and mountain classification awards.

"I was happy that I was there to show the rainbow jersey and to have the prize for combativity and the mountain prize, so at least we had Mitchelton-Scott on the podium to keep the sponsors happy, and I also think I showed our jersey a lot in front, so I took my TV time," she said.