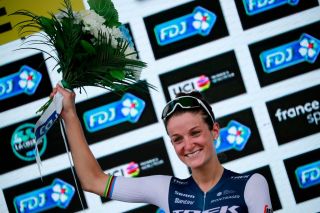 Lizzie Diegnan (Trek-Segafredo) has called on men's Tour de France organiser ASO, to further their commitment to women's cycling by offering a women's edition of the sports biggest race.

The former world champion won La Course by Le Tour de France held on Saturday in Nice, and while she was pleased with the one-day event, she believes a multi-day event tied to the men's Tour de France would help develop and grow women's cycling.

"I think we benefit definitely from being at the Tour de France, there's no doubt about it," Deignan said following her victory in Nice.

"The Tour de France is the biggest race in the world and draws the biggest audience so if we can be here, even if it's just for one day then it benefits women’s cycling.

"As an athlete, of course, I want a women’s Tour de France. I want to be pushed to my limits and showcase what women's sport is about. And then women's sport can be just more than just one stage of course. So I think, obviously, there's room for development and growth. I think we're going in that direction. But at the same time, I'm happy that we had this opportunity today."

UCI President David Lappartient said that ASO will launch a stage race for women in 2022, but he could not confirm that it would be officially named as the women's Tour de France.

Annemiek van Vleuten: We were a little bit unlucky at La Course

Deignan praised ASO for adding a first-ever women's Paris-Roubaix to the revised Women's WorldTour calendar, created after the original calendar was shutdown due to the COVID-29 coronavirus pandemic.

The event will take place on October 25, however, organisers have not yet released the route details.

"I think we're at a really exciting time in women's cycling and I was really excited and pleased that even during the pandemic year there was good news for women’s cycling. Paris-Roubaix was added to our calendar during a very difficult year for everybody in cycling. So I think that's really testament to the fact that there is lots of people who want women’s cycling to grow," Deignan said.

"I've obviously been in the sport for quite a long time now and I feel that we're improving all the time. We’re never going backwards. I know that we always need to push for more, we can't stop, but I don't think that was going to see any regression anymore and I think that's the most important step. I think if you’re a young female cyclist now, you can really see there’s a career in professional cycling, which is very exciting."

Deignan was part of a six-rider breakaway that sprinted to the finish line at La Course. She took the win ahead of Marianne Vos (CCC-Liv) and Demi Vollering (Parkhotel Valkenburg), but her teammate Elisa Longo Borghini, who was also in the move, set her up for that victory.

"I was just relieved that I won it," Deignan said. "What a performance by Trek-Segafredo today! Every single rider played their part and me and Elisa just really had to wait for final. Elisa did the perfect job, and forced Marianne to sprint early, and I took advantage of that.

"I think I had two of the best sprinters in the world in the car, [Team directors and former riders] Ina-Yoko Teutenberg and Giorgia Bronzini have both beaten Marianne Vos in lots of sprints, so I had the best advice and their advice was 'patience' and I took it."

The cycling season was shut down for five months due to the COVID-19 coronavirus but the top-tier of racing reopened on August 1 at Strade Bianche on August 1.

Deignan said she was pleased that ASO were able to go ahead with La Course, under strict health protocols, and that she felt safe at the race in Nice alongside stage 1 of the men's Tour de France.

"Yeah, of course, it's a different atmosphere," Deignan said. "And I feel like it's been a difficult season for everybody in cycling, but also in everybody's society and community.

"I think it's really impressive, and I have a lot of respect for the organization here that they have been able to start the Tour de France in such a way. I feel completely safe. The public were very respectful. And we can still do elite sport in a really difficult time for everybody. But it's still possible. And I feel really positive and proud to be part of this race. And I'm very grateful that we could be here."

Deignan, who also won GP de Plouay on Tuesday, moved into the lead of the Women's WorldTour and will wear the purple leader's jersey at the next round of the series at the Giro Rosa in September. She will also focus on the Tour of Flanders in October.

"It's a nice surprise. I look forward to wearing [the Women's WorldTour jersey]. It's always an honour," she said.