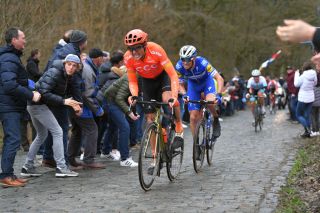 The transfer dealings of Greg Van Avermaet's CCC Team and Zdenek Štybar's Deceuninck-QuickStep are next up for analysis (Image credit: Getty Images Sport)

The 2019 road European road season is over and done with, and teams, riders and fans are already looking ahead to what next season will bring. With the bulk of the off-season's transfer dealings already completed and confirmed, Cyclingnews takes a look at the changes in the peloton and their impact in 2020.

Overview: The Polish team moves out of a transition year, recruiting a couple of star names as they seek to return to the heights of their previous guise as BMC.

Analysis: It was a tough debut season for CCC Team, with the revamped squad taking just six victories in the first year, post-BMC. With the sponsorship situation uncertain until the summer of 2018, numerous big-name riders headed elsewhere, with only Greg Van Avermaet staying as the sole figurehead for 2019.

Despite a late season resurgence, which included a win at the GP Montréal, the Belgian didn't hit the heights of 2016 or 2017, and so the team as a whole struggled.

Matteo Trentin's move to the squad instantly elevates their one-man band Classics squad to top-tier status. It will be intriguing to see how the Italian, who took a Tour de France stage win and a World Championship silver medal this year, combines with Van Avermaet in April.

Ilnur Zakarin, jumping ship from the folding Katusha-Alpecin, is the other big name to sign up. The Russian took his first win in two years at the summit finish of Lago Serrù at the Giro d'Italia, eventually finishing 10th overall in Verona.

The 30-year-old will, however, look for more at CCC. Namely a return to the form that saw him podium at the 2016 Vuelta a España months after finishing in the top five at the Giro. A group of quality veteran climbers including Alessandro De Marchi, Simon Geschke, Michael Schär, Serge Pauwels and Victor de la Parte look readily equipped to help him.

Fellow newcomers Fausto Masnada and Jan Hirt could join that list, too, depending on team objectives. Twenty-six-year-old Masnada won at San Giovanni Rotondo at the Giro, and could yet develop into a stage race rider as he steps up to the WorldTour, while Hirt challenged for a Giro top 10 in a previous spell at CCC when it was a Pro Continental team.

So things should be a lot different for CCC, then. Expectations from all corners will be raised and, on paper at least, 2020 should be a better year for the team than 2019.

Overview: It's big names out and youngsters in for Deceuninck-QuickStep in 2020. But, given their track record of developing youth, that might not be a problem for the Belgian team.

Analysis: After another year on top of the UCI rankings and the win list, it's time for change for Deceuninck-QuickStep heading into 2020. The team is losing several star riders, replacing them with eight riders, five of whom are under 23 years of age.

Elia Viviani (11 wins in 2019), Philippe Gilbert (Paris-Roubaix winner) and Enric Mas (second in the 2018 Vuelta a España) are on the way out, which would be a calamitous blow to almost any other team.

But Gilbert is 37 years old; sprinters – like Viviani – leaving QuickStep has, in recent years, not proved to be the best decision for their careers; while Mas, as a GC rider on a team whose focus largely lies elsewhere, was something of a square peg in a round hole at Deceuninck-QuickStep.

Then there are the riders they already have, with Julian Alaphilippe possibly the biggest star in cycling, Remco Evenepoel on a fast-track to competing for that title, and the likes of Fabio Jakobsen, Kasper Asgreen and Rémi Cavagna winning at the top level and still progressing.

Versatile Italian Davide Ballerini – who won the Memorial Marco Pantani this year – and his compatriot, climber Mattia Cattaneo, are the biggest names joining for 2020, but it's the swathe of talented youngsters turning pro with Deceuninck-QuickStep that are the most intriguing additions.

Twenty-year-old Andrea Bagioli's 2019 wins include the Ronde de l'Isard, a summit finish at the Giro della Valle d'Aosta and Il Piccolo Lombardia. Twenty-one-year-old Ian Garrison is already the senior US time trial champion. João Almeida, fourth at the Tour of Utah, is the latest talent to roll off the Hagens Berman Axeon production line.

Another 20-year-old, Belgian Mauri Vansevenant, won the Giro della Valle d'Aosta by four and half minutes. And finally, Germany's Jannik Steimle – the oldest of the lot at 23 – joined the team as a stagiaire in August and immediately won the Kampioenschap van Vlaanderen.

The future already looked bright for the powerhouse Belgian team. Now, even as three star names depart, it might have just got even brighter, and there could still be more to come...

Overview: After a disappointing 2019 season, it's all change for Dimension Data, who have rebranded as NTT Pro Cycling for next year. And after four years with the team, Mark Cavendish is also leaving, while the incoming riders are something of a mixed bag.

Analysis: NTT's biggest move is on the way out, with Mark Cavendish leaving for Bahrain-Merida after four years and 11 wins. The 34-year-old has been dogged by the Epstein-Barr virus for over two of those years, and if he gets back to winning ways with Bahrain-Merida, letting him go could end up a poor decision.

Still, there was a sense that it was time to part ways, and the team is seeing something of a clear-out of their older riders. Mark Renshaw and Lars Bak retire, while Bernhard Eisel and Steve Cummings are out of contract.

World Hour Record holder Victor Campenaerts is the biggest name on the way in, and looks likely to bag some big time-trial wins for the team. He's also vying for a spot at the Olympic Games time trial, where he'd be up among the favourites.

A trio of promising youngsters have also signed up, with U23 world road race champion Samuele Battistella and Italian U23 time trial champion Matteo Sobrero turning pro next year. Then there's Andreas Stokbro, who won the U23 Tour of Flanders this year, who joins from Riwal Readynez.

Those riders will take time to develop, though, so all eyes will be on various riders who underperformed in 2019, from the Ardennes trio of Roman Kreuziger, Enrico Gasparotto and Michael Valgren – to Grand Tour rider Louis Meintjes and Classics man Edvald Boasson Hagen.

If NTT can get the expected performance out of those team leaders, plus a couple of wins from new fastmen Max Walscheid and Carlos Barbero, then 2020 will be a good year for the men in blue.

Overview: The American squad has managed its off-season capably. With a climber, a couple of sprinters and cobbled Classics specialists heading out of the door, EF Education First have replaced them like-for-like, and look to be heading into 2020 in a stronger position while they're at it.

Analysis: The men in pink and blue have made some major moves during the past few months, and look to have come out on top heading into 2020, getting younger in the process while adding some oomph to their spring Classics squad.

Sprinters Dan McLay and Sacha Modolo, who both endured tough two-year spells at the team, leave and are replaced by 2016 U23 world champion Kristoffer Halvorsen, who joins from Team Ineos. To give you an idea of how high the team regard the 23-year-old, his signing announcement saw him touted as a future Milan-San Remo winner by EF boss Jonathan Vaughters.

Joe Dombrowski is also on the way out, just as he looked to blossom into a top climber with 12th overall at the Giro d'Italia. He's replaced by Jumbo-Visma's Neilson Powless, who, at five years younger the Dombrowski, impressed in assisting Primož Roglič to overall victory at the Vuelta a España, the American's first Grand Tour participation.

Classics men Matti Breschel and Taylor Phinney retire, with Breschel moving to the director's car and Phinney pursuing his passion for art. In comes Jens Keukeleire, who, after a string of top 15 finishes from Gent-Wevelgem to Flanders this year, will surely be a superdomestique to Sep Vanmarcke's quest for victory in Flanders and Roubaix.

The big news, though, is the signature of triple Grand Tour stage winner Magnus Cort from Astana. The versatile Dane can compete from April through the Grand Tour season, and looks like the team's biggest signing since Rigoberto Urán and Vanmarcke joined in 2016 and 2017.

Finally, in another savvy move, Swiss rider Stefan Bissegger will turn pro with the team in August after competing at the Olympics. The 21-year-old is a major talent, this year taking a stage win at the Tour de l'Avenir, silver at the Worlds U23 road race, and a bronze at the European Championships U23 time trial.

Overview: Last season saw three in and three out at Groupama-FDJ, with 13 contract extensions. This time around it has been just as quiet, with seven total transfers and no extensions to date.

Analysis: As was the case last year, Marc Madiot's squad has been the quietest team in the WorldTour transfer market so far this off-season. They've only signed three riders for 2020 including two men from their own development team, which raced its first season this year.

Twenty-six-year-old Lienhard, who raced at Pro Continental level for Holowesko-Citadel in 2018, impressed at Continental level for IAM Excelsior this year. His top 10s at the Coppa Sabatini, the GP Canton d'Argovie and three stages of the Tour de Suisse this year suggested that he could be a handy addition for the hills.

Brunel looks to be a similarly punchy rider, taking third at Liège-Bastogne-Liège U23 in 2018 and winning Paris-Tours Espoirs at the end of this season.

Guglielmi, 22, showed his climbing skills during his 70 race days in 2019, finishing in the top 10 at the Baby Giro and Il Piccolo Lombardia, as well as winning the mountain classification at the Tour Alsace.

Groupama-FDJ's moves, while not groundbreaking, show a further movement towards youth on a team that featured 11 riders aged 30 or older this season. In Morabito and Vaugrenard, two of those will retire.

But with youngsters taking time to settle in and develop, the team's focus once again will be on Thibaut Pinot's Tour de France hopes, as well as Arnaud Démare and Stefan Küng.

The trio delivered five wins apiece in 2019, while the development of 23-year-old David Gaudu, who impressed with 13th overall at the Tour this year, should be key to the team's 2020 success.