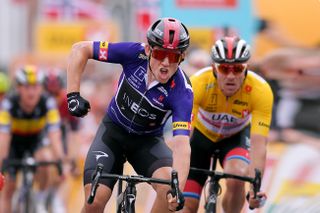 EF Education First have announced the signing of sprinter Kristoffer Halvorsen from Team Ineos. The Norwegian turned pro with the British team in 2018, and has taken two wins since, both in 2019.

Halvorsen won the U23 road race at the World Championships at Doha in 2016, one of a number of successes he achieved before turning pro, including the 2017 Handzame Classic and two stages at the Tour de l'Avenir plus the points classification in 2017.

This season the 23-year-old took a stage win apiece at the Herald Sun Tour and the Tour of Norway. He's the fourth Norwegian to ride for the team, after Thor Hushovd and Gabriel Rasch in 2011 and Kristoffer Skjerping from 2015 to 2016.

"From day one, I got a good feeling for EF and their desire to rely on me as a sprinter," said Halvorsen in a team press release. "My impression is that the team has a good environment and a culture that will suit me. This feels like the right choice to help me achieve my goals as a cyclist.

"I'm a sprinter that really, really likes to win and hates to lose. I want to help us win together as a team, help us develop as a team."

"Kristoffer is a great talent, and it's up to us now to help him realise that talent," he said. "Our sports science and sports director group is motivated to make this guy a champion.

"As an organisation, we're only missing one Monument on the trophy mantle, and that's Milan-San Remo. Halvorsen is our ticket to getting that last one over the fireplace."

Matti Breschel, who will retire and train as a directeur sportif, and UAE Team Emirates-bound Joe Dombrowski, are the two riders so far confirmed to leave the team at the end of the year.